One of the greatest things about being in our office is its location right on the corner of Covent Garden with so many places accessible by foot. Our lunch time outings seems to have formed a little ritual I will miss when I get back on a project. The other day, we went over to Mexicali, a place I’d noted when I’d visited Yauatcha. Although I consider myself a huge supporter of the Daddy Donkey stand, it doesn’t mean I can’t try other Mexican places such as this. 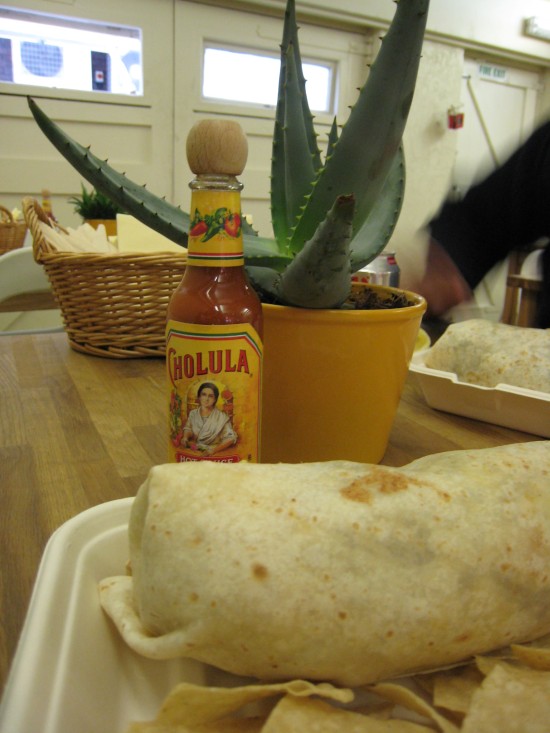 £5.20 will start the process of a soft fresh tortilla pulled from its stack, then wrapped around chunks of whichever meat you order, beans and a fairly ordinary salad together. I ordered a pork burrito that, although tasty, wasn’t as flavourful as the adobo one that Freebird (a Mexican stall at Exmouth market) offers. According to Luca, the flavour of the chicken also didn’t cut through the 50p guacamole and the beans. Mexicali’s establishment appears extremely new filled with some fairly casual tables and chairs, each topped with their very own cactus and Cholula hot sauce that does wonders to pep up your non-customisable burrito.

They have several other options on the menu although we didn’t get a chance to try them out. Unlike other places, this place also offers their burrito with a small serving of corn chips although they’re pretty tasteless without any options for salsa on the side and the like. I didn’t like the fact that they don’t offer upgraded chilli levels.

Details: Mexicali (website still in progress here)
Found at: 4 Berwick Street, Soho, London
Highlights: Reasonably priced burrito with extra hot sauce on the side
Room for improvement: Average taste with no room for customisation.
The Kua Rating: 5 out of 10

One Reply to “Mexicali”