It’s not often that you hear about a Chinese restaurant that has a great atmosphere although it is more common in cities such as London and New York. I’ve always tried to save going to them for some special occasion. Fortunately it’s my birthday quite soon and since I’m heading to India, am going to miss celebrating it here in London so my sister and I had a small outing to Alan Yau’s Hakkasan. In terms of restaurateurs, Yau has quite a number of great restaurants under his belt, including the ever popular Wagamama and Busaba Eathai.

Finding out about the Michelin-starred Hakkasan is easy since it’s fine dining concept gets rave reviews on many different websites. Strangely enough it doesn’t have a website much like it’s sister dim sum focused restaurant Yauatcha. Hakkasan is located at the end of a street I frequent to avoid the crowds surrounding the Tottenham Court tube station. It’s out of the way and unless you’d be looking for it, there’s no real reason to stumble across it. You’re greeted by a couple of men upstairs filtering those with reservations and those without although you’ll end up having the same conversation with people downstairs.

The dining room is striking, very much befitting a modern Chinese restaurant. Ornamental black lacquered carved walls separate the dining room from the bar and the kitchen continuing the traditional Asian theme. The room itself is otherwise quite dark with each table lit with at least one strong downlight. Unfortunately photos weren’t allowed (probably as a way of maintaining the dining experience).

Their cocktail and wine list is extensive, and it’s no wonder people can spend a fortune at this restaurant with at least ten bottles of wine well over one thousand pounds and many of the cocktails matching club prices. Fortunately they also offer an extensive non-alcoholic cocktail list, and a long list of teas supplied by sister restaurant Yauatcha.

Hakkasan’s menu is quite large and definitely not at all like what you would have in most other Chinese restaurants. They offered plenty of unique dishes, yet none of them seemed to really jump out at me screaming to be put on trial. Perhaps it was because many of them seemed to be some proper Chinese dish supplemented by some sort of exotic ingredient such as foie gras. We definitely splashed out, starting with a mango roast duck in a lemon sauce and jasmine tea smoked ribs. Out of the two, my sister and I agreed the ribs were the best out of the two with the sweet sauce covering an absolutely tender meat – the waiter comes along to cut the ribs into individual pieces and he was literally pushing the meat off the bone clean with only a fork and a butter knife. Unfortunately although the duck was impeccably presented, the tangy mango and lemon sauce didn’t quite work well with the duck.

For mains we had a grilled sea bass covered in Chinese honey, black bean vegetarian prawns and a stir fried chilli and spring onion duck dish presented on a bed of crispy vermicelli noodles. Out of the mains, I really enjoyed the duck although the sea bass came in a very close second. The duck was unfortunately not the amazingly spicy one I’d hoped it was be – instead a very gentle heat accompanying a rather sweet sauce that was still enjoyable. The sea bass was perfectly cooked, slightly glazed and served with a few greens.l They also had some deep fried mushrooms that almost seemed a little out of place given they didn’t stay crispy for very long swimming in the sweet sauce. Nothing very remarkable about the prawn dish, other than it seemed a little sweeter than your classic black bean sauce and some nice fresh chillies to eat with it.

We both skipped the dessert option since the choices didn’t seem as good as what I’d read about. Chinese cuisine isn’t particular well known for their sweets and Hakkasan’s offerings on our night seemed to match this perception with nothing particularly exotic.

In terms of service, I didn’t feel the place met its 13% stated worth despite the number of people buzzing about. It wasn’t exactly terrible but I did have to wait for a number of very simple things (such as the drinks menu) throughout the evening. Overall it’s a great experience and although I think you’ll get much better value at a large number of other Chinese restaurant, the dining experience is definitely worth it at least once.

Details: Hakkasan
Found on: 8 Hanway Place, London, W1T 1HD
Contactable on: 020 7907 1888
Highlights: Exquisite dining room, plenty of cocktail choices, and lots of exotic ingredients in classic Chinese dishes.
Room for improvement: Despite exotic ingredients, some of the dishes are not as exciting as they could be.
The Kua Rating: 8.5 out of 10

This weekend I was caught up with the baking bug and so ended up making some Melting Moments. What are they? Two delicious shortbread biscuits sandwiched together with a sweet vanilla butter cream. What more do I need to say? I tried two batches, one with plenty of vanilla and the other, substituting lemon juice and lots of lemon zest to give them just the right amount of citrus twist. 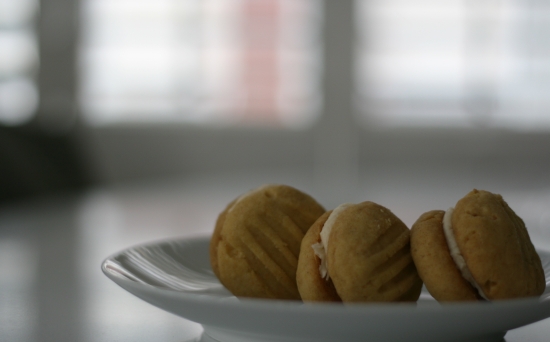 Read on for the recipe. END_OF_DOCUMENT_TOKEN_TO_BE_REPLACED

There are so many gastropubs around London so before heading off, I thought a leisurely lunch at one near Westbourne Grove would be a good place to catch up with some people. Ben and Michelle made a huge effort to come out, especially considering they’d been hit really hard with the flu that’s going around at the moment. Thanks to everyone else that came along on Sunday – it was a great lunch and awesome to see you all. 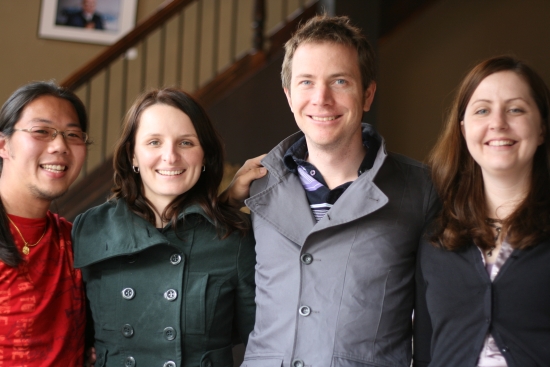 We arrived at The Fat Badger right before the rush hour. It’s found right up the far end of Portobello Road, right past where all the markets would normally be. Being a Sunday, it start getting quite busy after 1pm. We scored a couple of very comfy leather couches downstairs. Unfortunately the restaurant upstairs was booked out already although they serve most of the same foods downstairs where we picked a few from the main menu and, I think, almost went through most of their gastro bar snacks such as Quails Eggs with Celery Salt and Kentish Cobnuts. A few of us, including myself, had the smoked haddock served with a mussel and bacon chowder. It wasn’t as chowder-like as it could have been, though extremely tasty and filling.

Despite being disappointed with the opportunity of heading to India at the start of this year, I knew that another opportunity would come around, even if I had to create it myself. Fortunately my work has been very accommodating and I will be leaving London for a few months and work out of one (or maybe even two) of our offices in India. The main office is based in Bangalore, one of the hubs often described as India’s silicon valley.

I’m very much looking forward to the very different culture, working in a new environment that will help me appreciate all the things here in London and help me appreciate a whole new life as well. I’m hoping to fit a little bit of travel in although I’m not sure how that’s going to fit in with the nature of the work I’ll be doing, requiring a pretty regular running schedule during the week.

I’ve got all the necessary items now – my passport’s got the visa, I have a plane ticket, my immunisations pretty much taken care of, and all the details of arrival all planned out. It’s going to be hectic as soon as I arrive, at the very early hours of 4:30am Sunday morning but I’m looking forward to the opportunity. See you all in a while!

Did you know that the Royal Mail allows you to buy postage for your packages online and print it out yourself? You don’t even have to go into a post office to drop your packages off. Simply enter the details to work out the price, pay for it via several mechanisms including debit or credit card, print and tag your parcel and you’re set.

The only caveat are those packages that you want tracking for will still need to be dropped off at a post office (since they need to scan it to start the tracking from some point). For some reason I was really surprised to hear about this service, and I think it’s a great idea. Next time I don’t need tracking for something I need to send, I’ll definitely be using it. 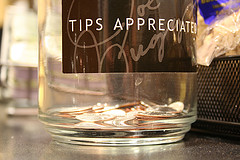 This week I’ve been to a couple of pubs for some leaving drinks and heard used for the first time the phrase “And One For Yourself”. After reading Watching The English, I don’t think I’ve ever seen it in action until Wednesday last week, one of those things that is quintessentially English.

Tipping in the form of cash seems to be frowned upon even though in London most bar people will no doubt appreciate it (probably because most of the bar people don’t tend to be English). The alternative to the cash tip is to instead buy the bartender a drink, hence the term “And One For Yourself”.

Photo from MyKuh’s Flickr stream under the Creative Commons Licence.

I’ve been tagged by the 8 things about me meme thanks to Gerrod. The rules start something like this:

Not one for rules (and because this meme’s been going around for a while) not to mention that most people haven’t been following the last one, consider yourself tagged if you’re reading this and blog about it if you want to participate. 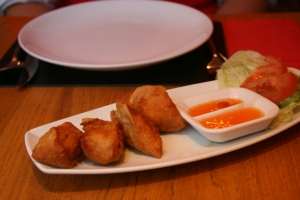 After using a deal from the AllInLondon site, I recently ate at the Thai restaurant Lemongrass found in Hackney. I can’t say that it was terribly easy to get to, first requiring a tube ride to either Angel or Highbury Islington and then a bus ride. The restaurant itself is quite spacious, with a skylight-lit dining room accommodating quite a large number of tables. During our evening it was surprisingly quiet, which is why I guess they offer a deal for dining during weekdays. I imagine it could be quite busy during the weekend. 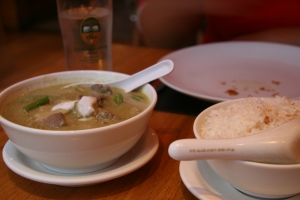 Lemongrass’ menu offers an extensive range of your typical Thai dishes, split into two sections – for vegetarians and non-vegetarians. In addition to their standard range of dishes they offer quite a number of very unique dishes including a number of Ostrich dishes and House Speciality ones. They also offer a number of very unique alcoholic and non-alcoholic cocktails and blended ice drinks that are well worth trying (the melon was was especially good).

Given that the deal was effectively 50% off the main meals, we tried a wide variety of their dishes including Hoi Joi (dumpling-crab meat minced chicken wrapped in delicate bean curd pastry served with dumpling sauce on top), an Ostrich Green Curry, their Chef Special Tiger Cry (a traditional Thai dish of char grilled beef steak, sliced and served with chilli sauce) and their Chef Special Tornado Scallop (stir fried win a special mild curry paste, with asparagus, pepper & spring onions.) 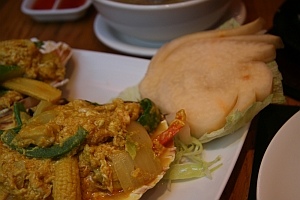 Out of the dishes that we had, I would definitely recommend the Ostrich Green Curry or the Scallop dish and stay far away from their Tiger Cry dish. The ostrich dish, though slightly gamey had the difference it needed to make it your out of the ordinary green curry. The scallop dish had at least twenty or so scallops in it, and although the curry mixture was very subtle suited the dish quite well. The Chef Special Tiger Cry was hugely disappointing, served on a sizzling plate though wasn’t sizzling when it arrived and though asked to be served medium had been cooked to over well done. More than that, it simply had nothing going for it like very bland strips of excessively toughened beef.