It’s been a while since I’d been out to the movies, and this time I went to Islington to see Frost/Nixon. Someone told me it was based on a stage play, and even though I was a bit sceptical about watching it, thought I’d give it a go. Focusing around the even that propelled David Frost into being taken seriously as an interviewer, and the trial that Nixon never had, the movie kept me on the edge of my seat for quite some time. It helps that it also starred, easy on the eyes, Rebecca Hall, and had moments of laughter, seriousness and tension without many potentially boring bits. The ending is a little bit sad, and didn’t finish quite the same way they started, but it’s a great movie worth watching. 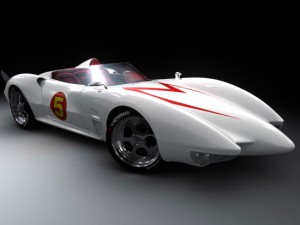 With the Matrix creators, the Wachowski Brothers at the helm of an anime remake, you know that you’re going to be in for a good show. It took me a while to see Speed Racer, yet missing the Imax and watching it home probably doesn’t really do it justice.

Story-wise, I’m not sure how it really followed the anime original. I’m assumed it didn’t deviate too strongly and as a newcomer, it seemed fairly straightforward to me. Just a simple story of the capitalistic attitudes changing the nature of racing against the passion of a single racer out to do the only thing he really knows how to do. Fortunately this racing isn’t like any that you’ve seen before, including a combination between classic formula-car like racing, bumper cars and Wacky Wheels or Mario Kart.

I’m surprised that such a uniquely styled movie, Speed Racer had the number of Hollywood stars that it did, including the likes of Emile Hirsch (from Into the Wild), Oscar winning Susan Sarandon, Christinna Ricci (long gone from the days of the Addams Family) and Golden Globe winner, John Goodman. Although I doubt any of their performances will will any awards, they fit into their characters perfectly, and continue to make the anime film come to life.

The highlight for me is simply the intoxicating, super rich visuals – fast moving backgrounds, flash camera pans between drivers as they talk to each other in their cars, and the overly saturated colours that make this comic book almost too real. Combine this with the futuristic cars and the totally scripted, yet perfectly timed comic book twists and poky fight scenes, this movie easily delights the senses.

I sense that this movie will be less the hollywood classic, than a cult figure amongst a certain set of people. After all, I don’t think the hollywood vision is what the Wachoski brothers set out to do. When you look at it as an attempt to convert the over the top antics of Japanese animated movie, into a fusion of the possible and impossible, and still make it look and feel natural, I reckon they did a very good job.

Last night I saw The Dark Knight and what did I think? Two words. Very impressive. There are many elements that make it really worth watching, particularly on the big screen. I was quite impressed by the (novel) lack of excessive CGI effects, or over the top explosions, instead replaced by classic elements of a movie that make it so different, such as the progressive development of many of its characters and a plot that left you questioning and asking for more.

I have to applaud Ledger’s performance and although I’m not sure if it’s Oscar worthy, I’d definitely agree with many of the reviews that it was spectacular, even spookier than Nicholson’s rendition back in the day. I think the most impressive aspect to Ledger’s Joker is that it’s clear that he is a madman, and not just a slightly zany villain with a sense of humour. Everything from his posture, this agitated mannerisms, and the random actions all point towards his questionable mental stability and lack of moral boundaries.

I don’t normally go out to cinemas to see mainstream movies, and when someone asked me along to see, Heavy Metal In Baghdad as part of the Sled Island Festival, it sounded pretty interesting.

The synopsis is pretty simple: What’s it like as a heavy metal band trying to get by in Baghdad?

This movie follows this band over a series of years, and combines two worlds we don’t normally associate being together – that of teenagers wanting some outlet to have fun, and the war time stories we typically hear on the news. Bringing them together provides some real insight and a very moving portrayal of a world we rarely think about. Everything seems very surreal, from the young guys talk about how lucky they are to be alive in their mid to late twenties, to the efforts of their families to get them out and keep them out of the country, and the sounds of shooting and bombings in the air at night.

On the way to London, flying BA, we had the great on demand entertainment system. It broke down on the flight back and ended up with multi-channels of entertainment instead of the on demand system. I still had a great opportunity to see a few movies. Read the short reviews below:

Surf’s Up
An animation film involving rather overly cutesy Penguin characters that are into surfing. Stepping out of the rather repetitive and trite format of animation movies, the behind-the-scenes format involving the perspective of the camera crew and some very funny interview sessions made it much more refreshing. It’s a light hearted tale that’s easy to watch and expect a few chuckles but not any laugh out loud moments. TheKua.Com Rating : 7 out of 10

Withnail & I
Recommended to me by one of my friends, this cult film portrays two struggling actors set at the end of the 1960s and living in Camden town trying to live their life and a quick get away to the country. Though stated as a “comedy” in the movie guide, I felt the seriousness (even for English comedy) was sometimes a little bit much. I found it an interesting insight into life during that period and found it entirely believable as well. I wouldn’t recommend this movie and though I didn’t enjoy it that much whilst watching it, I can see its appeal to some audiences. If anything, it’s interesting to see places like Camden Town, and Regents Park (at the end of the movie) used throughout the movie. TheKua.Com Rating: 5 out of 10

Knocked Up
A recent comedy movie featuring the girl I knew from Roswell. It tells the story of a one-night stand turning into an accidental pregnancy with all the ups and downs that go alongside. It features some awkward moments and I became a little bit bored with the all too common jokes. TheKua.Com Rating: 3 out of 10.

The Ex
A black comedy featuring Scrubs’ star Zach Braff about a New York couple moving back to Ohio and how they deal with raising a new baby, starting a new job and dealing with old relationships. There’s some very cringe-worthy moments, with plenty of things going wrong. Described well as a combination between The Office and Meet The Parents, this movie is made more worthwhile with the addition of those small Zach Braff moments. TheKua.Com Rating: 7 out of 10.

He Was A Quiet Man
Tables turn as a quiet office worked with intent to kill ends up as a hero after shooting a worker who ends up killing others first. He ends up taking care of one of the only survivors of the office shooting – someone that is the only person he cares about. Suddenly he is more popular than he’s ever been and doesn’t know how to deal with it. It’s certainly a different role for Christian Slater to play and an intriguing movie with plenty of internal dialogue to boot. TheKua.Com Rating: 7.5 out of 10.

Then read about a guy who hit all 171 Starbucks in New York in a day. Check it out here.

Let’s get one thing out the way first – when you have a movie based on a cartoon and series of kids figurines you should really know what to expect. With this in mind, I actually really enjoyed it. After hearing some reviews from Julie and Gareth at work, I ended up seeing it with one of my flatmates yesterday.

The movie synopsis is simple and does not deviate too far from the cartoon – alien robots from another planet drop onto Earth in seek of an ultimate power source. One group, the Deceptacons, wants to use it to transform the Earth into a semblance of their former planet, while the other group, the Autobots, want to find this power source before the other group does to prevent Earth’s destruction. The robots and, like most movies in this genre, the fate of the world depends on a single item possessed by your typical less-than-popular nervous kid who also just so happens to form a bond with one of the Autobot transformers.

Remembering this genre of movie, you have to suspend your beliefs in many parts of the movie such as the attitudes of the Sector 7 guys, the sharpshooting of the Secretary of Defense, the focus of the Australian systems analyst (not to mention her “hacker friend”), and the amazingly perfect shot from the soldier on the sliding motorcycle scene at the end.

What it loses points on, the movie makes up with lots of action scenes, plenty of humour and enough reminiscent moments without being excessively cheesy. Some highlights for me included the wiping away the dust to reveal the Autobot icon, Bumblebee taking on the form of the new racer, and Optimus Prime using his sword to take out one of the Deceptacons.

I won’t admit the movie may not appeal to many people though I at least found it very entertaining and a surprisingly long movie at that.

Spotted on Tottenham Court Road. Oceans 13 strangely brought to us by… Ocean 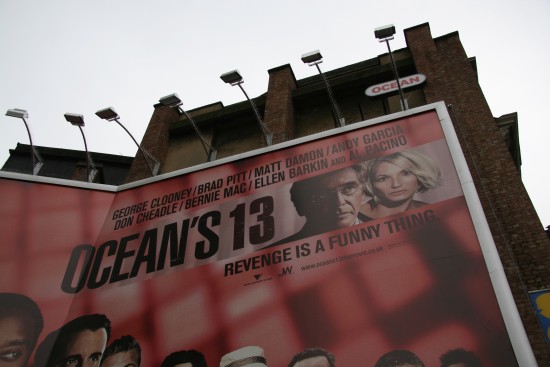