I wasn’t really sure of what to expect coming to Johannesburg. When I hear of Capetown I remember of stories of how tourist friendly and safe it is. Also about how white it is. Yes – that seems to be okay to say when you’re in South Africa.

Johannesburg is a whole other matter. I think I remember hearing stories about people being held at gunpoint at traffic lights for their car and money and several other devastatingly other traumatic stories. It reminds me of some of the things I heard about Brazil. Fortunately reality doesn’t always play out to these stories but until you find yourself in the situation – it’s really hard to know.

I have to say my experience in Jozi (as they call it) has been rather sheltered. I am staying in a hotel in Rosebank, an obviously affluent part of the city and somewhat protected from probably what the “true” South Africa is like. It’s made even more strange by the fact the hotel I am staying in is physically connected to a shopping centre (mall) which is a completely cut off and definitely unrealistic experience of the city. 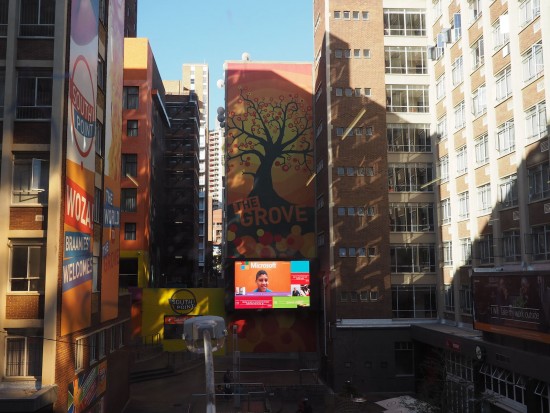 Our office sits in Braamfontein, a mixed place that during the day is like visiting Hoxton or Dalston during the weekend. Evenings are a whole other matter and is apparently like the rough parts to Dalston. Rejuvenation, hipsters, craft beer, street/weekend markets on one hand and danger, muggings and knife problems on the other. It’s a bit like every big city but probably on the edgier side.

The city is really spread out and the affluent people have their own cars to drive around. There is little public transport and apparently it is quite normal for drink driving (a lot of deaths are caused each year this way). The use of taxis is rather uncommon for the affluent class – as they drive their own cars (sober or not). I have used Uber as a way of getting around and the taxi drivers seem really happy with it after being here for just over a year. It’s definitely easy to use, and has given me a bit more comfort getting into strangers cars that a) I don’t need to give cash, b) there is some electronic trace about where I was/where I am going.

People have been really warm all over and I am definitely adjusting to the local customs. Punctuality isn’t necessarily expected. Despite being neither black nor white, I haven’t had the stares that I might have expected (like the ones I received in India).