To celebrate the launch of their latest album, the Kaiser Chiefs played at The Forum on Monday night and I managed to get a couple of tickets. It was cold and wet outside, so I was thankful that we had standing tickets for downstairs that made heading out after work completely worth it. We managed to get fairly close to the front, bordering on the edge of all the more energetic people who jumped around most of the night, or pushed their way in for at least some of it. Other than a couple of, rather excessively drunk and, agressive people, the audience was rather quite friendly. Compared to the last concert I went to, the average height of the Brits made me need to weave in and out between the flowing gap between shoulders.

We caught the end of the first support act, The Hair and didn’t really hear enough to be able to give them any fair review. The second support act however was much more memorable with four really young looking kids called Late of the Pier. Energetic doesn’t even begin to describe them, each member playing several instruments throughout their set and the lead signer managing to knock over a couple of pieces of their kit on stage, to the point we would have bets what piece would be next to go. They still impressed me with their passionate performance, crazy antics with some decent beats and riffs to boot. I think that we even signed up to their mailing list. 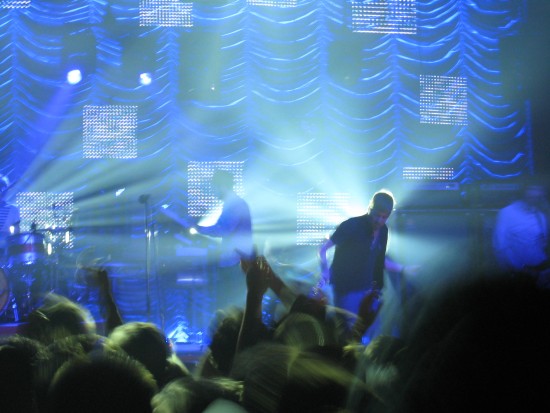 The set changes came quickly and it wasn’t too long before the Kaiser Chiefs came on stage. With dazzling lights and tonnes of energy, they played a mix of all the songs from their previous album with a handful of ones from their recently released one.

In terms of entertainment value, it’s obvious the band cares about their audience having a good time, to the point where the lead singer ran through the crowd a couple of times, making sure everyone seemed to have a good night, and the lead signer encouraging the small number of crowd surfing antics with his own deeds. 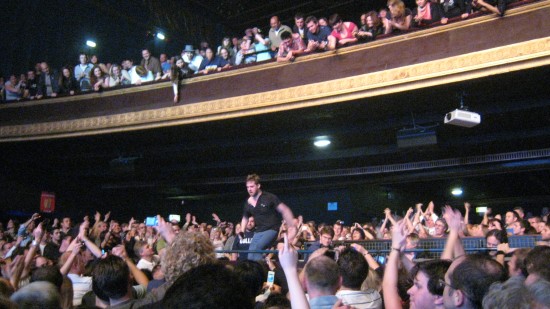 I can’t remember how long they playted but they continued to impress all night, even getting the audience involved singing Happy Birthday to one of the band members. I don’t think I’ve been to a gig where the band have had such consistently high energy for all night and it really shows in their excellent performance.

One Reply to “Kaiser Chiefs at The Forum”