I’ve spent the last four days in Signapore roaming all the things there are to do and even getting out to a little part of Malaysia. Most of the things that I ended up doing and seeing could most classified as very ‘touristy’, but in this, probably most westernised of all Asian countries, is very difficult to avoid.

Accommodation is expensive and even all the last minute prices available on the Internet were surprisingly steep. I ended up staying in a hotel in the midst of Little India, and though my room was literally no larger than a walking space around my bed, it was fine for its reasonable price. Staying in Little India was a great experience because it’s definitely less touristy than many other hotel locations around major shopping centres or tourist attractions. The area may impress a visitor during the day, but night time provides a whole new experience as the streets are literally teeming with people eating at the huge number of Indian restaurants, shopping at the various market places or just hanging out having beer or listening to some Bangla-Pop (is that even a real thing?) 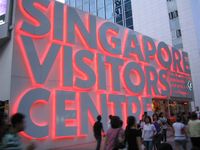 As a visitor, I found Singapore very easy to get around with the Mass Rail Transit (MRT) system providing fast air-conditioned transport to major areas, and taxis at extremely reasonable rates when your feet get tired or when you’re too far from a MRT station. Most of the major tourist attractions and areas are very close together making your entire holiday walkable with the only deterrent really being the heat and the humidity acting against you. 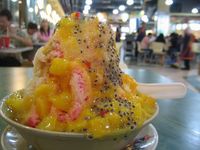 One big particular pastime in Singapore I’ve heard people and books rave about is the food, with popular hygienic food courts being the main staple to the majority of the people. Singapore has countless food courts, each filled with numerous stalls each serving distinct cuisines far too numerous to wholly list but include Chinese, Malay, Japanese, Indonesian, Indian. Normally there is at least one stall devoted solely to drinks including fresh fruit juices, and another especially for the refreshing shaved-ice based desserts that I definitely indulged in during the holiday. Numerous restaurants are also scattered around but the food courts offer the best value for money with a single meal typically costing S$3 or £1!

Here is a quick list of all the things I managed to do while I was here in Singapore:

You can find the photos here.