This weekend I got to share in celebrating the American holiday, thanksgiving with some friends from the US. I hosted it at my place considering we had a little bit of a bigger kitchen.

Finding a fresh turkey at this time of year wasn’t as hard as I thought it could be with turkey being a traditional English Christmas bird. I ended up ordering a non frozen organic bird from the wonderful butchers in Marylebone, The Ginger Pig. I can’t say it was particularly cheap but it was definitely one tasty bird. 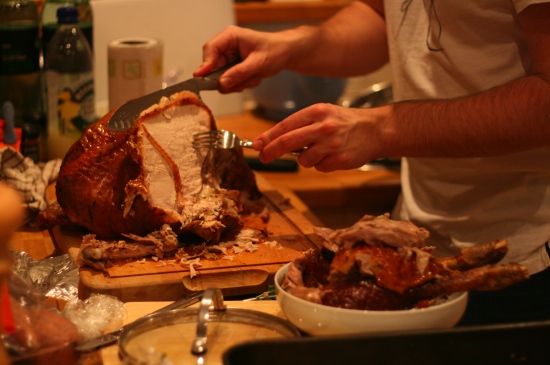 Thanksgiving ended up a whole day affair since the bird needed plenty of time to cook. This gave us plenty of time to chill out, watch some television and drink some wine. One of the traditions was for each guest to bring or prepare some dish that represents their background, so we ended up with many different dishes for the evening. Combined with a 7.5kg turkey, let’s just say that there was plenty of leftovers at the end of the night.

Now my only challenge has been to work out what other things I can cook with turkey as a meat.

2 Replies to “An american thanksgiving in london”