Although the name sounds like some sort of variant of the lubricant, cleaner and anti-corrosive WD-40, this restaurant bears no other resemblance and is actually a combination between the restauranteur’s name and the address. I wanted to try this place out as the chef was well known for matching bizarre and strange ingredients, much along the lines of The Fat Duck. Karl and I had dinner here, first trying an appetizer and entree (main course) the followed by the three course dessert tasting menu. What followed was an extravaganza of a meal.

Our waitress provided fantastic service throughout the night and we joked with her about a number of things (like the endless cutlery that accompanied everything). She also gave us two glasses of free dessert wine (a light rose, and followed with the muscat) that went smashingly with the multi-course desserts we had.

Read on to find more about our culinary journey.

We both started with different appetisers. Karl ordered the Octopus, on the menu as Grilled octopus, avocado, juniper, lychee-campari and since I can never resist eel, had to try that. On the menu it was Smoked eel, salsify, guava, puffed yuzu 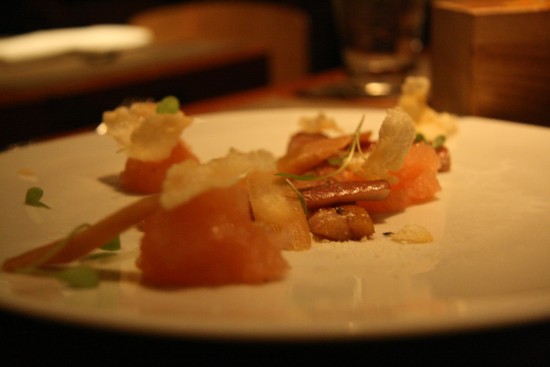 This dish was a real stretch for my tastebuds, both in terms of flavour and the texture of the dish. I found the smoked eel had a very overpowering flavour, which I’m still not convinced went well with the tiny little balls bursting with the light, fresh and fruity flavour of guava. The puffed yuzu looked like tiny little prawn crackers, except much lighter and a slightly different flavour. They still looked like ones you’d get in Chinese restaurants. I’m also not quite sure where the salsify ended up. Don’t get me wrong. I was impressed by the dish – both its presentation and complex layers of flavours. I found the eel extremely tasty on its own and combining tiny bits of the other parts of the plate set some better expectations of what was to come.

The next dish, that Karl and I both ordered was the Wagyu flat iron, coffee gnocchi, coconut, cipollini, sylvetta 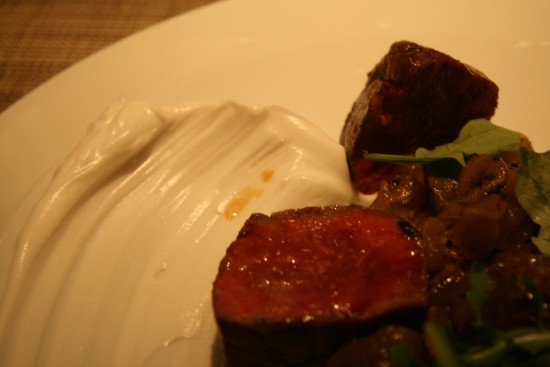 Wagyu beef is extremely tender by itself and the medium rare cooking was just perfect for this dish. The coconut came in the form of a light whipped cream, literally smashed along the plate on the edge in a fanciful swirl. We talked about how well the flavours of the beef and the sweetness of the coconut complemented each other well, Karl reminding me how well it tends to work in thai curries. I could only taste the light coffee flavour of the soft gnocchi pillows only when I ate them by themselves, otherwise lost amongst the sweetness of the onions and the stronger flavours of the beef and coconut. This was definitely was dish I enjoyed eating at every bite.

The several rounds of desserts came next and although we went for the three course tasting menu, and a couple of glasses of dessert wine compliments of our waitress. Our first dessert dish apparently was the palette cleanser, yet came straight off the dessert menu – not that I’m complaining. We were served this beautiful dish, which I think was the Jasmine custard, black tea, banana dish. 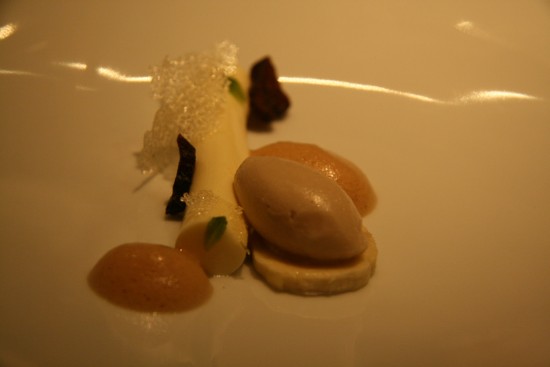 The jasmine custard had a light texture and its soft fragrance permeated throughout. Crystal shards of sugar dotted both ends and I’m not quite sure what the foam or the ice cream was, but it went perfectly with it all. I think both Karl and I were both surprised with the banana as well, thinking it was a simple slice. I’m not sure what they did with it, but the edges were perfectly crisp, almost as if they’d been snap frozen yet the rest of the banana was as normal as ever.

Our next dish was the Yuzu curd, shortbread, spruce yogurt, pistachio that ended up being my most favourite of the night. 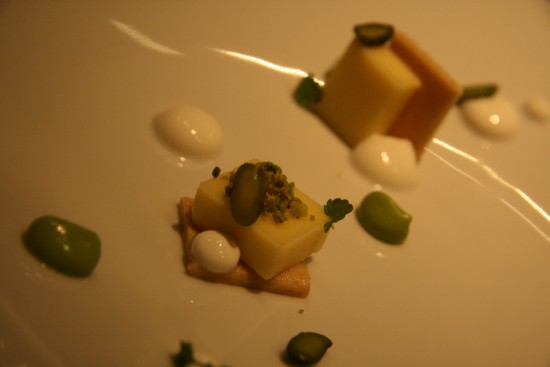 I’d read earlier that Yuzu was some sort of Asian citrus fruit. The curd in this case had been reconstructed to look like two small blocks of cheese, backed up by the crackers (in the form of the shortbread) and dotted with the yogurt and pistachio. The shortbread wasn’t any ordinary shortbread either – it had a soft texture, like it’d been soaked in some sort of liquid, yet scooping small bits yielded this incredibly crunchy texture layered into it. As I said, no ordinary shortbread. The curd had an amazingly intense citrus flavour. It certainly didn’t taste like any ordinary orange, lemon, lime or tangerine flavour. The closest I can imagine is a mix between a passionfruit and orange flavour. 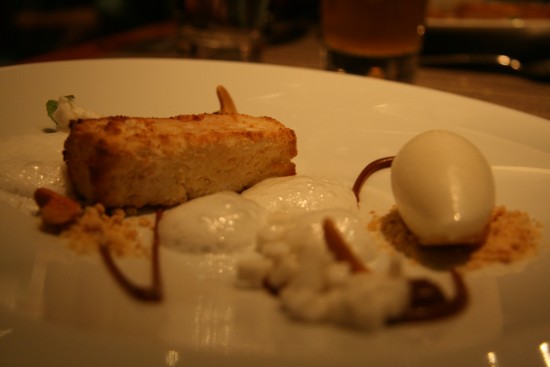 The cake was light and soft, warmed from the toasted outsides. The cashew went surprisingly well with the other dishes, and unlike the smokiness of the eel, didn’t overwhelm the rest of the dish. As for the brown butter ice cream, it had a deep caramel flavour without being excessively sweet and the crushed shards of some sort of crumble underneath it complementing it especially well. I don’t know what the foam tasted like on this plate as there were plenty of other flavours going on.

After the first three courses of dessert, we realised that we hadn’t received the soft white chocolate dish that Karl had specifically ordered for the tasting menu, and so we ended up with another dish (for free), described on the menu as Soft white chocolate, potato, malt, and white beer ice cream. 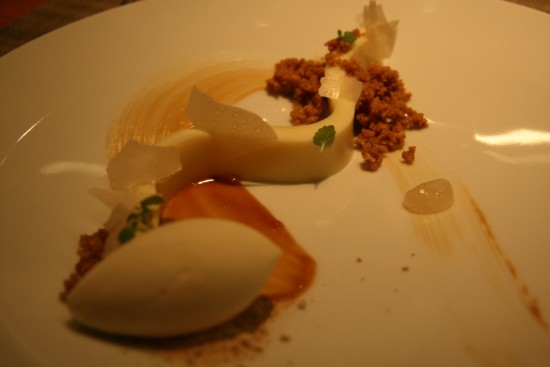 The potato came in the form of tiny little crisps, embedded into the wave of soft white chocolate surrounded by the malt at one end and the white beer ice cream at the other. Surprisingly the ice cream had a strong, yet subtle flavour of beer that went down a treat with all the other bits on the plate.

More thoughts on the restaurant
I guess one thing you have to do when going to a restaurant like this is just open yourself up to the flavours being offered, forgetting about what was in there. Even for just one dish, keeping track of four or five different combinations of flavours and exotic ingredients is a grasp for anyone. Not knowing some of the additions making teasing out flavours ever more difficult. I remember one of the tables next to us, puzzling after the waiter presented the food, five seconds later simplified the dish as, “Oh, it’s that cherry and chocolate one.”

Tables in this joint are intimate. You don’t have to put any effort into listening to the conversations going on at either side of the table and I guess this can add or take what you want from it. We had a couple of conversations with one table next to us, as they asked us what we ate and what we recommended. I think they both enjoyed the recommendation of the beef and the Yuzu curd we ate.

Details: WD-50
Found at: 50 Clinton Street, New York, NY 10002
Contactable on: +1 212 477 2900
Highlights: Fantastic presentation, unique combination of flavours and tastes with plenty of exotic ingredients.
Room for improvement: Dishes can be a bit hit or miss depending on what you like. It’s also easy to forget what you’re actually eating (the detail that is).
The Kua Rating: 9 out of 10