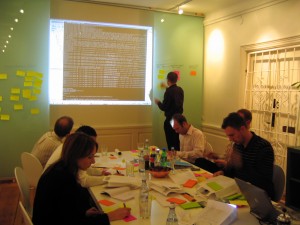 This weekend went by far too quickly with a quick trip to Stockholm. All of Saturday was pretty much talking shop with a great bunch of agile-enthusiasts that I met at XP2006, who invited me to run a full day session of my Test Driving Swing presentation. I’ve run this session at XP2006 and Javazone this year and because it fits tightly into an hour I found it refreshing to run through it at a much slower pace and in more detail.

The crowd was just the right size to be interactive. I found it effective first taking their objectives and tweaking parts of the presentation to focus on the detail where they wanted. I even had time to run a retrospective that was beneficial to both the audience and myself – I got some useful feedback and the audience participated in their first retrospective, a tool some mentioned that they were going to try on their own projects.

For future demonstrations, I think I’ll avoid typing *all* of the code myself, or at least practice many times since I made a few silly mistakes (and I know that being tired [BA was supremely late arriving in Sweden] is no excuse). I think it would also be good to have a much deeper and more complex system that was completely Test Driven to the extreme as an example, though I know I will have no time to write it on my own any time soon.

I do have to thank the Agical guys for giving me another opportunity to run my session. We had some fun discussions over some wonderful meals and drinks at both Mårten Trotzig and Gondolen, both very excellent restaurants.