I first heard of SATURN via social media through Michael Keeling, an IBM employee who spoke at XP2009 many years ago. Sam Newman spoke last year about Microservices. Although the conference has a Call For Papers (CFP) each year, they also had a small number of invited speakers and Michael organised for me to go along to talk about Evolutionary Architecture.

SATURN is a conference organised by the SEI (Software Engineering Institute). SEI are probably most well known for CMM, although there is now another institute responsible for it. The conference has been running since 2005 and has a long history of focusing on architectural concerns. 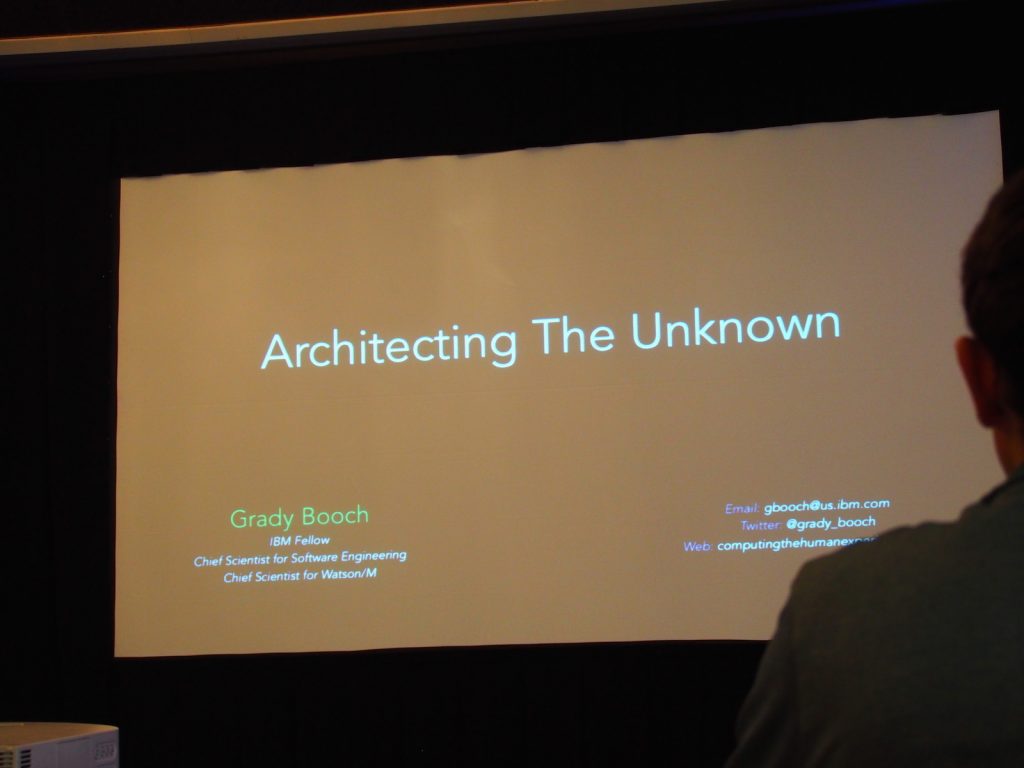 What I really liked about the conference

I believe that one of SATURN’s greatest strengths is a focus on architectural thinking, through the application of the latest tools. Unlike some other conferences, I felt like the programme tried to assemble a good collection of experience reports and presentations that emphasised the architectural principles, rather than focusing on the current tools.

Although this may be less popular for people wanting to learn how to use a specific tool, I feel this emphasis is much more valuable and the lessons longer lasting.

What I also really enjoyed about the conference was the relatively small size which was just over 200 participants from various parts of the world. Having a good location, and small size allowed for some better quality conversations both with other speakers and attendees. One good example of the conference facilitating this, was an office hours session for attendees to easily ask questions of speakers. I shared by office hours with Eoin Woods (author of Software Systems Architecture) and Grady Booch (IBM Fellow, One of the Three Amigos who were best known for developing the Unified Modeling Language). 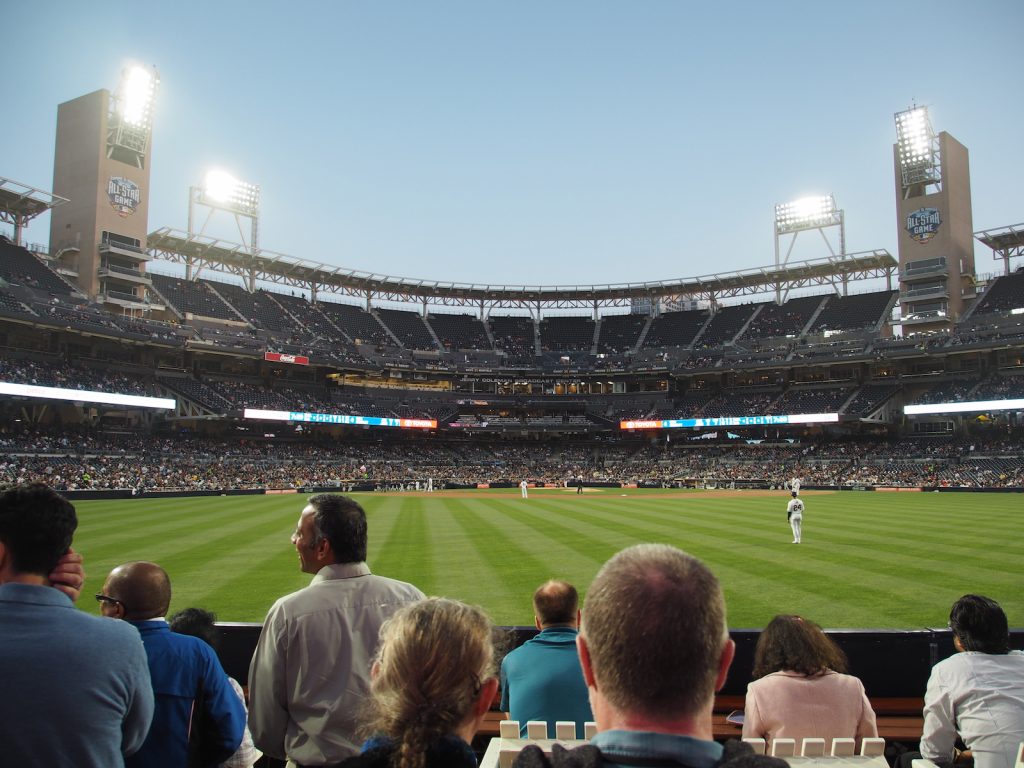 Conference dinner at a baseball game for SATURN 2016

Another example to reinforce that was connecting with Len Bass (one of the authors of Software Architecture in Practice) at the conference dinner (at a baseball game).

During the conference I spoke with many people carrying various Architect titles. Interestingly many came from many larger organisations and government agencies, which shouldn’t have been any surprise given the history of the conference. I remember meeting and speaking with one particular Enterprise Architect (EA), who seemed to be one of the most pragmatic EAs I’d met, who was trying at all costs to stop his board randomly signing large contracts with product vendors like Oracle and IBM without the proper diligence about understanding what they were actually building.

At the same time, I met a number of architects struggling to help their organisations see the value of architecture and the role of the architect.

I spoke after Booch’s initial keynote, “Architecting for the Unknown” which lead really well onto the topic I was speaking on, “Evolutionary Architecture“. I had a packed room as was a topic that resonated with people. At one point the conference organised brought more chairs into the room and there was still only standing room for the 90 minute talk! I had some great questions and conversations throughout and found out later that I won the award for the best conference talk in the “Architecture in Practice” category! 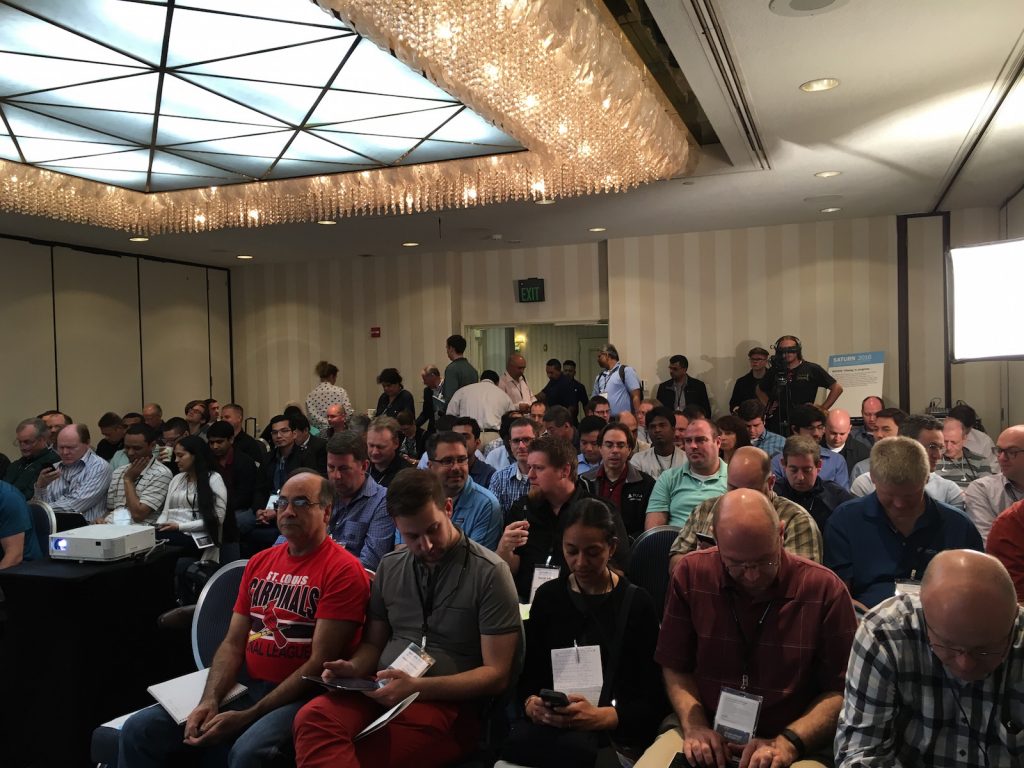 I’d definitely recommend attending SATURN if you’re interested in focused on building architectural thinking and an opportunity to connect with architects across the industry. The size is great for conversations, sharing experiences and with next year’s scheduled for Colorado will be really interesting too.

I’d like to thank the organising group calling out Michele Falce (Technical Event Coordinator), Bill Pollak (General Chair), Jørn Ølmheim and Amine Chigani (Technial Co-Chairs) who did a great job putting together a fantastic conference, John Klein for hosting Office Hours, and Michael Keeling for organising an invite for me.