A gym instructor told me yesterday that it was the day that most people statistically give up their new year’s resolution. Whether or not it is true, it got me thinking about what works when changing behaviours, whether individually or in an organizational context. What follows are some of my favourite approaches to making change stick.

In my experience, the bigger the change is, the more likely it is to fail because old habits come back, or the change hits too many barriers. A more significant change means less chance of success because it requires more time, energy and motivation to accomplish – all of which can easily run out.

Five years ago I was unsure about whether I could be a full-time vegetarian. Rather than commit to being full-time vegetarian, I kept it small by deciding to trial it for an entire month. In this time, I made myself experience as many activities I enjoy in the trial period (eating out, traveling) to work out being full-time would not suit me. In the end, I decided a 2-day per week vegetarian habit would work instead.

If you want to make a change, find smaller steps towards the end goal.

2. Build on an existing habit

I have a friend who gave up smoking but took up a running habit instead. After talking to him, I realised a lot of his success was described in the book, “The Power of Habit.” In this book, they describe how we often build responses to stimulus as rewards, which eventually becomes a habit. Our first approach to change is to simply stop the response but habits make that difficult because they are automatic.

The book explains that stopping the habitual response hard. However replacing the response with a different response can be a lot easier.

One of the many reasons fitness websites like Runkeeper want to connect you with your friends it that social pressure and acknowledgement from family and friends is a really powerful mechanism for instituting change. Websites like Runkeeper fail because they treat every connection the same, even though we have different types of relationships with people. Acts such as making a commitment to a group of close friends, or training regularly with the same group of people is great motivation to maintain a new change.

I saw this most recently when a bunch of friends and I signed up for a Tough Mudder. Before the event, a friend of mine didn’t regularly train. They knew the event would be a challenge so hired a personal trainer and went regularly several times a week. In the course of six months until the event, they built up the fitness, strength and skills required by Tough Mudder and finished it brilliantly.

One of the wonders of our human mind is our ability to influence the future simply through belief (or what’s commonly known as the Placebo Effect). In organisations and in personal coaching, I find the Futurespectives activities of the most powerful practices because it helps people imagine what the future state could be like.

All too often people fail at change because they focus too much on what is blocking them rather than focusing on what they can do to move towards this end state. An exercise I know used by a few friends is the Letter from the Future to visualise their desired end states.

With my experiences using appreciative inquiry, I have found that celebrating the small achievements for what is working is often a more powerful motivating factor than focusing on what didn’t work. It leads into a positively reinforcing loop that can establish new habits and make lasting change as pictured in the diagram below. 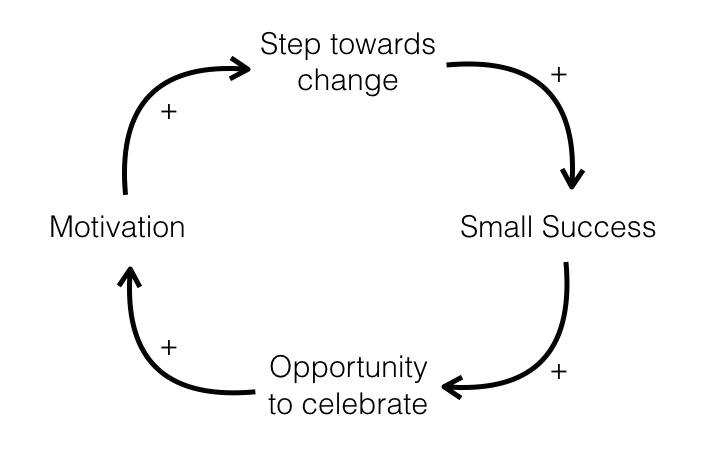 There are many other opportunities to make change stick I find that these five steps are the techniques and practices I draw upon the most. Books I have found useful on this topic include

What do you do to make change stick?