A few people have arrived at this blog looking for the terms, “Giving feedback to defensive people.” Before focusing on the fact that the recipient may be “defensive”, I’ll refer to you to several different posts outlining some principles of giving effective feedback. Read them before continuing on.

Firstly, if you’re giving feedback to a person, ensure that you follow the principles of effective feedback.

Many times I’ve heard several people give feedback and it is not in the spirit of either of these. Often, they give feedback with the intent of improving their own effectiveness, not necessarily the recipient. For a variety of different reasons, it’s easy for me to improve my own effectiveness by asking people what to do – something that is selfishly easy. It takes more courage and effort, putting yourself in the recipient’s shoes to help them out. 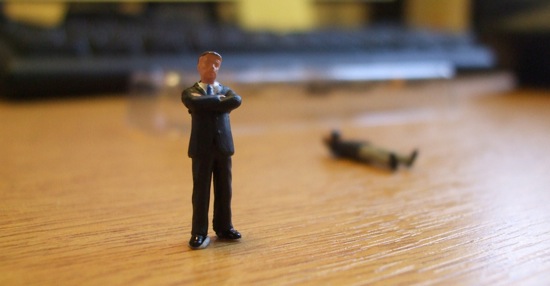 If someone comes across as “defensive”, I’d ask yourself what circumstances they could possibly be under that make them so. Perhaps they have other things on their mind, and are preoccupied in a manner that makes it difficult to listen to feedback. The solution? Ask them if now is a good time to give them feedback.

Maybe the recipient associates “feedback” with “criticism” due to others “giving them feedback” ineffectively, fuelling a cycle of defensiveness. The solution? I find it easy to spend a quick minute or two describing the basic principles of feedback, and help them understand you are here with the true intent of either strengthening their confidence or improving their effectiveness. I like to emphasis it should be a conversation and that I will try to be a specific as possible, but encourage questioning if the recipient needs clarity.

Another reason the recipient may be defensive is for fear of being judged as a person. The solution? Focus on behaviours and impact, rather than attempting to describe what you think their motives are. This doesn’t mean you cannot have an opinion, however it should be clearly stated about how you interpret the impact, not on how you interpret them as a person.

They may truly believe that whatever situation you describe, they disagree with. The solution? Start with the model I describe here, seeking agreement for observations, then impact, before thinking about recommendations. Any disagreement on the early stages will inevitably lead to disagreements on future stages.

Finally, as a person giving feedback, you need to accept the recipient may choose to acknowledge, disagree with or do nothing with the feedback you gift to them. I remember one incident, quite recently, where a colleague gave me feedback with recommendations. We talked about it, both understanding the variety of forces unbeknownst to each other. At the end of the conversation, I concluded I would have repeated the same behaviour in the same circumstances, however that’s when the feedback donor got frustrated.

My lesson: if you’re giving feedback to someone, be prepared to say, “I respect that we disagree on something, and thank you for being prepared to listen.”