It was almost a decade ago, I first watched Hans Rosling talk about the ever changing state of the world (see the videos here). He was a poster-child for demonstrating how visuals can bring static data to life. In his last legacy to the world, Rosling published the book, “Factfullness.” Unfortunately he passed away in 2017 due to pancreatic cancer.

Factfullness reflects many of Rosling’s personal stories. It also shares his frustration with a world filled with bias and “fake news.” This book is extremely relevant given the current state of politics both in the UK and the US. 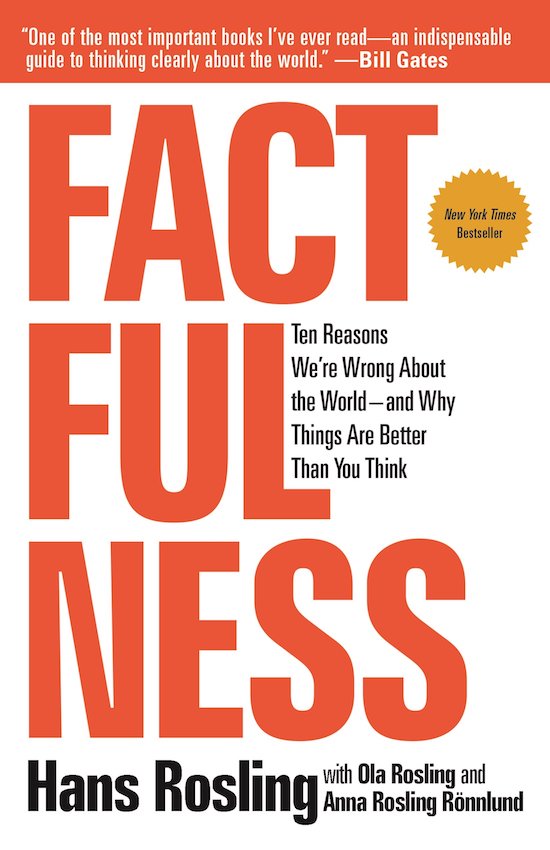 Factfullness challenges us to push past biased social and news media. Instead we should focus on globally available data such as from the United Nations. In the book, Rosling paints a much more positive view of the world than what the media likes to portray. As he often repeats, “It may still be bad, but it’s significantly better.”

Fuelled with data, Rosling shows us how child mortality is drastically decreasing. He demonstrates how fewer people live in critical poverty. He reminds us how women have better rights today. The book highlights how monkeys are more factful than educated humans. Rosling points out we are less factful because of “Instincts.”

The Gap Instinct describes how we quickly classify something into one of two camps. Examples include being poor/rich, sick/healthy, or us/them. Reality is more of a spectrum, with a majority in the middle and that there’s not that much of a gap. Rosling warns us to be careful of extreme comparisons.

The media fuels the Negativity Instinct. Rosling points out, “Negative news sells.” He contrasts this with an observation that  incremental improvements are not considered newsworthy. In this chapter, he starts using the phrase he later repeats, “It can be both better and bad.” (The situation can still improve, but the world has improved significantly.)

The Straight Line Instinct describes how we think linearly. In the context of an ever growing population, this instinct fuels the fear of overpopulation. Rosling highlights how childbirth rates reduce as a country becomes more prosperous. He challenges us to use data to better understand the shape of data. He gives examples where curves are more like doubling curves, or act like an S-curve. Straight line functions are the exception rather than the rule.

Rosling shares a personal example where the Fear Instinct causes unclear thinking. This reminds me of the Type I thinking (from Thinking Fast and Slow by Daniel Kahneman). Type I thinking means we react in critical situations with poor results. Fears from physical harm, captivity or contamination drive us to act irrationally. Rosling challenges us to differentiate between frightening and dangerous. Danger is risk multiplied by exposure. When we recognise this instinct, seek calmness before making an important decision.

The Size Instinct focuses our attention on individual numbers out of context. A compelling story or a concrete example leads to us overestimating an impact. Rosling recommends we look at numbers in proportion. We should do relative comparisons, or look at trends rather than numbers alone. Rosling reminds us of the Pareto Principle (80/20 rule) or use rates (e.g. number per person).

The Generalisation Instinct describes our habit to automatically category and generalise. Stereotyping through generalising leads us to incorrect conclusions or unjustified judgements. It also leads us to poorer decisions. GapMinder invented Dollar Street to highlight different categories. Rosling challenges us to look for differences and similiaries across categories. Avoid using categories to justify an assumption.

The Destiny Instinct drives us to believe destiny is pre-determined. This reminds me of the Fixed versus Growth Mindsets, made popular by Carol Dweck. To fight the Destiny Instinct, we must recognise small improvements and changes. We should seek knowledge about how cultures and societies do change over time.

The Single Perspective Instinct drives us to seek a simple solution or answer. I recognise this instinct from my studies in Systems Thinking. A counter against this instinct is to collect different Mental Models. Each Mental Model provides a different perspective on a situation. I loved this quote from this chapter. “The world cannot be understood without numbers, and it cannot be understood with numbers alone.”

The Blame Instinct describes our desire to find a scapegoat, or to point the blame at an individual. It blocks our ability to focus on contributing factors. It also means we are unlikely to prevent similiar problems in the future. Rosling provides great advice here. It reminds me of advice for healthy, blameless post-mortems. “Look for causes, not villains and look for systems, not heroes.”

The final instinct Rosling describes is the Urgency Instinct. This instinct draws upon Type I thinking and biases for action now rather than later. Rosling reminds us that urgent decisions are rare. He encourages us to take a breath, insist on data and be wary of taking drastic actions.

I really enjoyed reading this book. Rosling’s personal stories bring vibrancy to the book. He highlights how even “experts” or “highly educated” people fail to act factfully. The book makes us wary of the “Instincts” and provides concrete actions to help us. If you’re interested in learning more about Factfullness, get the book here.