The Technology Landscape in Singapore

Earlier this year, I held my Tech Lead Skills for Developers workshop in Singapore and Thailand. It was a short and busy week including some customer visits and a talk on Building Evolutionary Architectures for the local community.

As a consultant, I’m lucky to travel to different parts of the world where I have been able to compare technology industries and cultures around the world. Please note that the following observations are simply my observations and not necessarily backed by research.

Talking to a number of managers, it’s apparently very difficult to find experienced and very good developers. There seem to be a number of reasons for this including how Singapore Universities aren’t producing enough software developers, a country limit that ensures a consistent ratio of foreign and local talent and a culture that values higher status over getting things done.

Singapore reminds me a lot like London. The financial sector has a big impact on the technology market. London is much more diverse from that perspective. Singapore, like London, is a small dense population with a very good public transportation network. The public infrastructure enables many community meetups as people don’t have to worry about driving, traffic or how long the commute might take and thus enables a lot of learning to be done.

One of people I met during my time at Singapore, Michael Cheng (or @coderkungfu), organises the Engineers.SG website, where they go around to meet ups, film the talks and put them online. 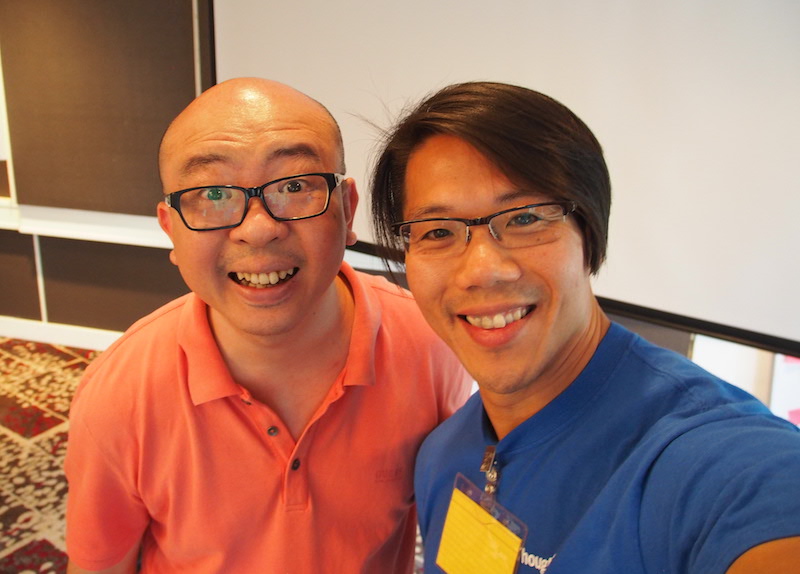 Above is a picture of Michael and I during the course I was running. What he organises is no small time-commitment, and is a huge service to the community and makes the content available to a much wider group.

Accroding to Hofsted, a researcher on the cultural dimensions of countries, Singapore has one of the highest PDI ratings. This means that ranking, titles and the relationship between titles matter more to people in Singapore than in countries with a lower PDI (such as the US or the UK).

Translated into the local market – almost everyone wants to be a manager.

One person was telling me about one team where they had two developers building software and eight managers managing! It wasn’t of any surprise to me that this team worked in a finance industry. It also didn’t surprise me that not a lot of work got done!

Singapore is following, not yet leading in technology

Singapore is known for its passion and drive to make a big difference for its size. I see many great things changing on the island state, however I see many other challenges in their market that simply investing in programmes as a nation won’t necessarily change.

If you want any other perspectives on this market, I’d recommend reading the following article: Singaporeans, wake up! Why software is eating your island.