Book Review: The Art of Learning

I like reading books that describe how people grow. It’s useful as a Technical Leader to help you grow your team, it’s useful as an agile coach to help people build new skills and useful to you to look at how you can grow yourself. Thanks to pop-economics books like “Outliers” people might spend 10,000 hours working on a skill but never really master it. As I have heard people say before:

Here’s a good post why top achievers 10,000 hours may be different to yours.

The book is written from the perspective of Josh Waitzkin, a guy who has had an incredible life mastering a couple of disciplines that couldn’t really be any further apart, Chess and Pushing Hands. He’s even had a movie made out of his life. 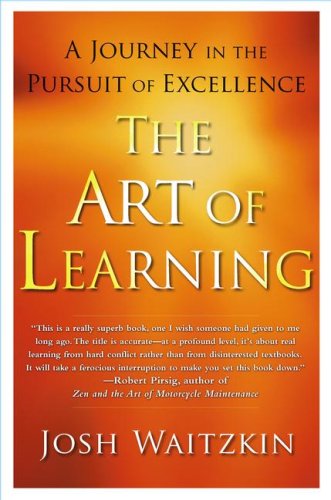 What I liked about the book
Waitzkin has already led a life ripe for several movies, and he describes his journey like a story book unfolding. I found it engaging because it is personal. He writes about detail that others could not know and he’s happy to disclose difficult parts of his life. I think these details made me relate to him much more.

I sensed he thinking deeply about himself, and in a way, observing this in his writing gave me respect he already knew a lot about learning (it’s hard to get better if you have no idea what you’re doing!) He isn’t particularly prescriptive about his learnings

I find it clear that he thinks deeply about his own self, and in a way, I think that makes him already very effective as a learner. He isn’t particularly prescriptive about his method of learning, talking about some general steps that take the form of chapters and draws upon his own personal anecdotes to make examples of them.

Although I found his personal stories captivating, I felt they were slightly embellished because of the way he discusses what other people were thinking during certain events (particularly during competition). Take it with a grain of salt, but it slightly tarnished some of the storytelling for me.

I also enjoyed the linking of the personal journey to the chapter titles, but would have been useful to have a summary providing insight into making it a bit more practical concrete. Reading other reviews on sites like amazon also give people some of this frustration.

His two personal situations were focused on competition and I think reflections some of the emphasis of “another opponent”. I found this difficult to translate into learning skills for self-development where you aren’t “opposed” to a single person such as learning a language.

His chapter Using adversity gave me examples of how to turn difficult situations into learning opportunities. His drive and motivation reinforce other ideas about learning I have read about (that it’s about dedication and not necessarily innate skill that drives success).

The chapter Slowing down time reminded me about the differences between expert and beginner’s mindset that demonstrate what is “magic” to one person is perceived differently and working on how to break the “magic” into smaller, learnable, and practices steps accelerates the learning process. I think this requires a lot of self-perception, and the importance of exposing yourself to more difficult, challenging situations.

I gave this book away to someone recently because I felt they would benefit from it. However it is definitely one that I will be trying to read again sometime as I am sure to have a different insight by focusing on different areas. If you’re interested in learning, this is an enjoyable book that teaches some good principles but lacking concrete actions. Still recommended reading.

His personal stories are particularly captivating, but I find it difficult for him to conclusively draw what other people were thinking in the way that he describes