Optimising for info on the go

Up in the Air represents a great example of what it’s like to be a consultant. It’s a little stark and depressing at times, yet extremely accurate in many places. Optimising workflow matters to quality of life when travelling. There’s nothing worse that being stuck in an airport when there are many other things that you can do. I can highly relate to its main character, describing what it’s like:

“That’s exactly what it is, it’s luggage. You know how much time you lose by checking in? … 35 minutes a flight. I travel 270 days a year. That’s 157 hours. That makes seven days. You willing to throw away an entire week on that?”

There are many other aspects to optimise when you’re looking at travelling like this. One of the things made difficult is digesting large amounts of content, things I would normally need to be connected online for. Here’s how I’ve optimised my workflow.

The iPad Difference
Winning the iPad in a competition we had last year made a huge difference to enabling this. It’s been the biggest enabler to reading content while being disconnected from the Internet. It’s instant on. Instant off. This means I have the opportunity to digest content on the plane while waiting for the plane to taxi, the attendants to complete their safety briefing and turn it off when instructed to do so at the flick of a switch.

ReadItLater (Speedy Digesting)
Last year I tried a couple of applications that downloaded online content for offline digesting. I signed up for the ReadItLater service and been extremely happy with it. As an application it has two modes – one for seeing the original HTML content, and the other that attempts to “smart parse” the core text of a web page, making it easier to digest. Not perfect, but I’m completely satisfied with it.

WIth this application, I send ReadItLater links (I’ll expand on this further) and then sync the application before I leave the house, for it to download all the content for later reading. It has tagging (though I don’t tend to use it as much as I did originally), its fast at rendering content and has some great features for looking at photos for those image-heavy webpages.

The clunkier and definitely less efficient alternative would be to “Save Web Page As” or “Print/Save to PDF”, transferring them to the many available PDF or content readers.

Note: I tried the other popular offline content reader, Instapaper, but ReadItLater has served me well.

Speedy Indexing via Bookmarking & Application Integration
One of the great aspects to ReadItLater is its popular integration with many applications. Initially, I used the browser bookmarking feature in firefox, chrome and safari. This means, when I find interesting links on my laptop that I don’t’ want to read immediately I simply bookmark it for reading it later. I know I’ll digest it pretty quickly on my next trip.

Book marking works okay for the odd article or two, but is a bit clunky when dealing with links from twitter. Clicking through on twitter, opening the browser and then bookmarking is a bit clunky. Particularly on things like mobile devices. Fortunately ReadItLater also have great integration at this level. Holding down on a link in both Echofon (for iPhone) and the native Twitter application on the iPad gives options to send links to ReadItLater. Works great with photo links, web links, etc.

Extreme Speedy Indexing via Application Integration with Shortcut Keys
For about two months, I used this method to read most of my content. Something that was still clunky was sending long, or particularly interesting content from my RSS Reader (Google) for offline reading. Chrome had a couple of plugins as did firefox as well as a couple of Google Reader Lab options to send an article to ReadItLater. Unfortunately most of these options weren’t as simply as a checkbox instead needing to do things like “Click Send To”, “Hover over options”, “Select ReadItLater”. Not particularly smooth. 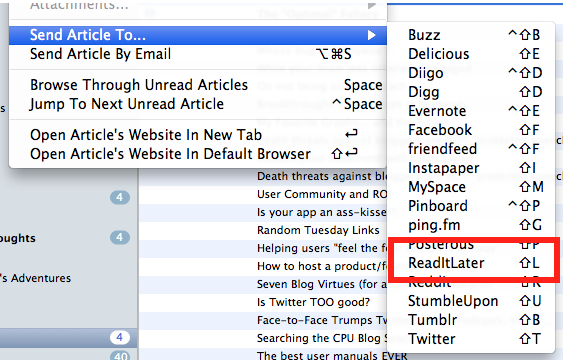 I recently stumbled across a great RSS Reader for the Mac called Gruml. Best of all, it feels like it’s been designed for keyboard-shortcut obsessed people like myself. It syncs with Google Reader, and then, using the keyboard, I can quickly send articles to ReadItLater, as simple as hitting SHIFT-L. This makes a huge difference when I’m quickly scanning through my reader, using the arrow keys to move up and down different feed groups, articles and then choosing which ones to send. Each keystroke doesn’t block either, letting me move on to the next article to quickly send articles.