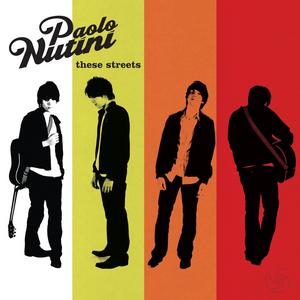 Last night I saw Scottish pop singer Paolo Nutini in Kentish Town at The Forum. At only 19 years old, this young musical star has the scratchy voice of a much older person and though it doesn’t come through when he speaks, his vocal range and talent are well beyond his years. The gig was completely sold out demonstrating his popularity. Rod Stewart even came along, further testifying to the talent that deserves recognition and appreciation.

Paolo did an amazing job of a richly entertaining show, both musical and visual with a great range of songs and a light show. You do have to look past him sometimes when he performs as he looks like the convulsive John Mayer whilst performing, but in a way you have to appreciate the passion that he has, and the amazing voice that comes from his small frame. He performed many of his songs from his current album, These Streets, a few new songs, and even a few covers that only he could render in his own unique way.

The best thing about this concert was that, unlike any I’ve been to, this one organised a recording of some of the songs and offered it as the “Bootleg EP” – only five songs from the concert for only a fiver! For the small amount of time it took us to line up, and thankfully a much shorter time actually picking up the CD in the huge queue, I definitely think it was worth it. It’s so good in fact, I’m listening to it right now as I write this entry.

I highly recommend you listen to his album if you get a chance, if nothing for his unique voice and easy going songs. I think he deserves the popularity he has got around the world, and I’m sure you’ll agree with me if you ever get to see him perform live. 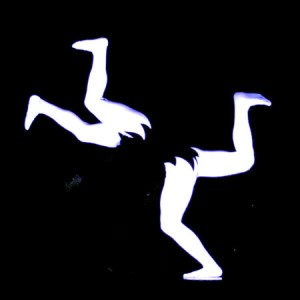 Last year I saw Momix’s previous production and was so impressed by it (and gently encouraged by an offer from LastMinute.com) that I decided to see their current production, Lunar Sea. This production was once again held at the Peacock Theatre, a nice little intimate stage that tends to be very popular for acrobatic or rich visual movement performances.

Compared to last year’s production that included many more props and elaborate costumes, Tuesday’s performance was much simpler but much more evocative drawing upon large scenery projections, deep tribal like music and some impressive choreographed visualisations in costumes that lit up under a black light. The theme between the ocean and the moon flowed in and out throughout the performance with some exceptionally eye-boggling eye tricks.

Half the time I found myself wondering how they even accomplished some of the impressive stunts such as simulating a flock of seagulls flying, to simply sitting back and losing myself in the surreal world presented on stage. It’s definitely not a show that will whet everyone’s appetite, but it is distinctive enough to be well worth the ticket price. 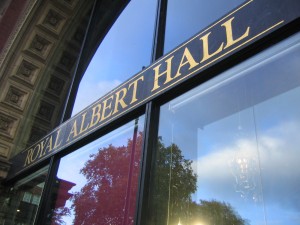 This Sunday was my first time to visit the Royal Albert Hall, a large and majestic theatre with a capacity to hold an overwhelming number of people. It was here that I saw the musical bonanza titled ‘Best of Broadway’. This composition of this show was extremely simple – one song from the most popular Broadway shows ever all performed by the Royal Philharmonic Orchestra and a handful of West End musical stars. They performed a wide range of songs, from the more traditional shows such as Les Miserables, Phantom of the Opera and Evita to some more recent ones including Wicked, Mamma Mia, and The Lion King. I was expecting a little bit more of a well rounded audience, but perhaps it was the choice of performance and the Sunday afternoon show that meant well over 70% of the theatre was filled with bus loads of a much older crowd of sorts.

I can only recommend this show to big fans of people that enjoy the music from the most popular musicals as each song does not last too long, and the show seems a little bit disjoint moving from one theme to another so quickly. I was at least still impressed to be sitting inside an amazing venue and listening to the impressive Philharmonic Orchestra.

After this though, I am even more intrigued to see what the performance of Modest Mouse will be like in this venue next year (23 May to be exact).

Crowds of people congregating in front of a theatre dressed (or undressed) in various costumes including vinyl nurse outfits and outrageous fishnet stocking can only mean one thing… The Rocky Horror Show is about to begin. On Tuesday night I ended up seeing this classical musical and found it extremely bizarre especially since I had not seen the movie before and had no idea what the story would be about. If there is one thing I concluded from seeing this musical, people do not go see the movie for its story.

Of all the shows that I have seen so far, this one had much larger audience participation, boosted by a number of cast extras strategically scattered throughout the crowd. The extras throughout the night hassled the actors on stage by shouting out comments and obscenities at certain parts throughout the play, sometimes proving comical, but at many other times failing dismally as they missed their cue or as the band drowned them out.

I found the songs and the music piercingly loud, despite sitting in the middle of the stalls and not in front of any particular loud speaker. The crowd obviously had watched the musical, or at least, had listened to the soundtrack a lot as many of them sang along throughout the performance.

I think this long running musical has a lot of fun points and I think you will enjoy it as long as you don’t take anything too seriously. It is definitely not the highest quality musical showing at the West End, but its fame from the classic movie and quirkiness will easily win any fans over. 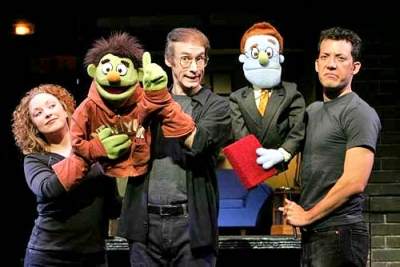 Last night I saw the musical Avenue Q, the show most well known as described as Sesame Street with adult themes. This musical had shown on Broadway for the last six months, has been on preview in the West End for the last three weeks and this week marked its first official showings. If you have never seen Jim Jimson puppetry live, the experience is completely worth it, and even though there are people manning puppets on stage, you slowly stop noticing the people as they take on the same character they are puppeteering.

I was extremely impressed by the lead puppeteers with many of the actors playing multiple characters and having the difficult chore of singing in multiple voices as well as acting them out. Their body language shined and fit well with the subtle body language of each of the puppets. I really enjoyed the light heartedness of the entire play though parts of it were definitely not something you could bring kids to. 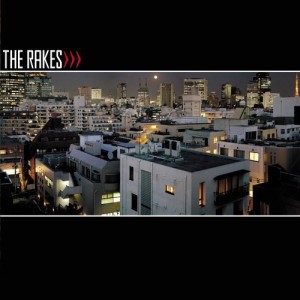 The last two weeks finally caught up with me midweek, and though I managed to recover from it with a record twelve or so hours sleep in, I think I’m still in recovery mode. Due to this, Tuesday was my last night out this week where I spent it watching The Rakes perform at the Islington Academy. They are yet another awesome British rock band – part punk, part indie and part alternative. Their lyrics are simple, entertaining and extremely catchy. Definitely check out their latest album Capture Release if you can, or better yet, see them live if you can find any tickets to their ever-popular gigs.

I had never been to the Islington Academy before, and I was quite impressed as it was a good sized venue (not too large) and had air-conditioning to boot! Admittedly the venue was probably not as full as it could have been, but I was thankful it wasn’t on our particular night. The Rakes definitely filled the venue that night and put on a performance that pleased the crowd, and the best part about the night was that it was free because it had been sponsored by Converse – bargain! 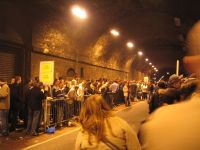 London is one of those central hubs of the world (a few European and American cities come to mind as well) where dance music thrives, so it is only appropriate to at least get yourself to a dance event worth going to. This Saturday, I found myself standing underneath a row of lights beneath London Bridge Tube station with a bunch of mates, waiting in a massive queue only to get into the February Raindance. It was kind of surreal standing with at least hundreds of other people beneath the tunnels, wisps of smoke pervading the air and the occassional car, and not-so-occasional (read frequent) hawker trying to sell their wares (glo sticks and other stuff). 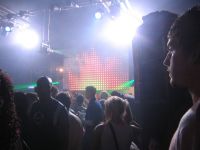 Raindance is a rave held three times a year somewhere around London. This time it was held at Seone and like most things in London, people came out in scores to visit. Though entrance was pretty low, be prepared to pay handsomely for essentials, especially the bottle of water (at £2.50 a pop!) but is still worth the fun night everyone had. There were several major rooms, each playing different types of music including Hardcore, House, Club Classic, Old Skool, Jungle Drum ‘N Bass, House, Hard House, and Breakbeat. My favourite room was definitely the D&B room but doubling as a major thoroughfare meant it was completely packed all night long.

Thanks to Grandpa Mushroom Joe and Mike for organising the entire night and the rest of the gang for making it an awesome and tiring night!

Last night my sister and I went to see the Chinese State Circus and the Shaolin Wushu Monks at London’s Southbank. The Chinese Circus is unlike any other circus act you may have seen. Though it has nothing like the drama of Cirque du Soleil, the use of the Monkey King as the narrator for the entire show was effective in presenting all the different acts to the audience made up of the very young to the very old.

Though many of the circus acts when you list them appear standard such as acrobatics, juggling, contortion and tightrope, there is just so much more to the way that the Chinese State Cirucs managed to execute them. There was an elegant lady with long sleeves that was also used to throw daggers to pop balloons with precision, clay pot jugglers that performed some amazing balancing and juggling feats with heavy pots, a traditional dragon dance that was visually spectacular, and a lady that effectively become a human candelabra balancing five sets of lit candles all whilst rolling around on the ground in different ways. There was amazing hoop diving, fantastic tightrope walking/running/skipping/jumping not to mention the stunning feats of the Shaolin Wushu warriors.

It is an entertaining show that I think everyone of all ages could easily enjoy.
The Kua Rating: 8.5 out of 10