One of the greatest things about working in London is the sheer amount of diversity. You have so many people from so many corners of the world and we often get to work with people from all sorts of places. On my current project, for example, we have about twenty people on our immediate team, of which we have fifteen different nationalities. Pretty cool!

One of our team members decided to organise a pot luck lunch where, basically, everyone brings a dish in for lunch with the theme being something that represents the country that they’re from. As you can imagine, it was quite a diverse spread.

We had vietnamese spring rolls (fresh and fried) from Vietname, we had some Russian dumplings, Latvian pancakes, Indian curry, Indian basmati rice, English Fish and Chips, German potatoes with green sauce, and plenty of other things I can’t remember. And then we got on to the desserts including Pavlova (New Zealand), Tiramisu (Italy), Eton Mess (England) and Lamingtons (Aus)

We kicked the lunch off with everyone presenting their dishes, talking about their origins and, perhaps, how it might be typically eaten. 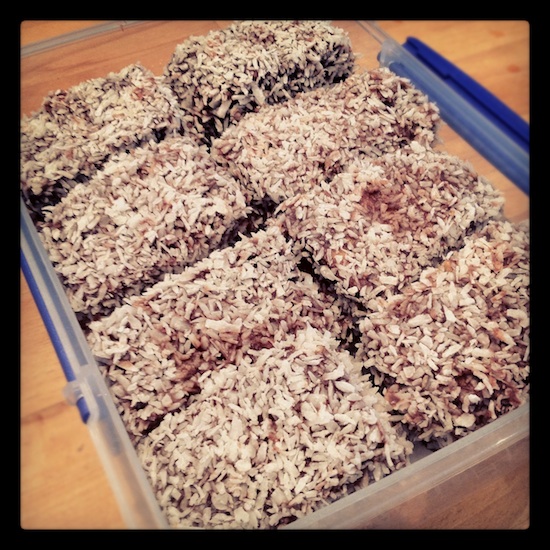 I prepared a duo of two things including Aussie mini meat pies with tomato sauce, and then followed up with lamingtons (which I’ve never made before). I have to say that I’d probably not be making them anytime soon as well because they took quite a lot of effort to make.