Apparently the most expensive musical ever to be produced on Broadway, Spiderman was one of those very hot tickets to get over the holiday season in New York. We ended up standing in line for rush tickets, those last minute tickets that the box office releases for the day, on what happened to be the coldest day in New York that we were there. -9 degrees Celcius with windchill, -18 degrees Celcius! We weren’t even the first people in line, when we started to queue and hour and a quarter before the box office opened. Between my sister and myself, we rotated our position in line to try to jump into the nearest warm cafe to defrost our limbs before cycling back. 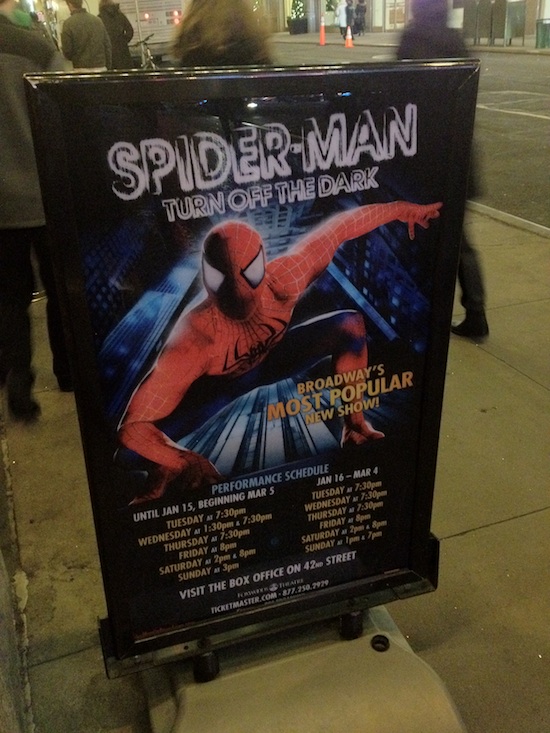 Thank goodness they hadn’t sold out by the time that we got there and we ended up with some reasonable tickets for a cheap US$33 (right at the back) for 19:30 that evening. At least we still got a really good view of the stage, even if our seats came pre-filled with an additional seated cushion. I wasn’t expecting so much out of this musical. It is, after all, based after a comic book but I have to say it wasn’t the worst one that I’ve seen. The impressive use of the stage and theatre as well as the visuals was enchanting.

The much lauded aerial tricks grew a little weary, and the battle scene, super-cheesy (but appropriate) for the given genre. The music, developed by Bono, wouldn’t be exactly something I would describe as the pinnacle of his career, and the love interest Mary Jane seemed to outshine her main counterpart as the person with the strongest stage presence.

Would I see it again? Not for the US$100+ tickets most of them were going for, but for a more reasonable price, I would. I’m glad to say that I also didn’t fall asleep given how warm it was inside the theatre.