Yes, the picture below is supposed to be Jack Johnson and his band. I tried taking my new lens to get a really good view of the stage but apparently the lens was too big and I wasn’t allowed to bring it inside. Sarah and I had a laugh at trying to take pictures right at the other side of the stadium, with this big blur the end result. 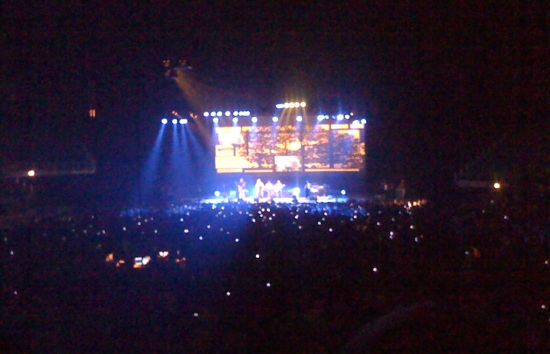 Jack Johnson hasn’t toured for a while, and that was quite evident with the number of false starts and laid back laughs interrupting, his otherwise really fun set. Of course, this laid back attitude is what you’d expect from someone who puts out tunes best suited for lazy afternoons and the sun setting by the beach. I was thinking how cool it would have been if the O2 could actually open their roof up. Given that the weather has been wonderful, this would have been almost the perfect way you could enjoy some of Jack’s riffs.

I guess the main reason he’s touring is to promote his new album, To The Sea, though playing a mix of lots of his old stuff as well. A great way to spend a Wednesday evening in London.

2 Replies to “Jack Johnson at the O2”