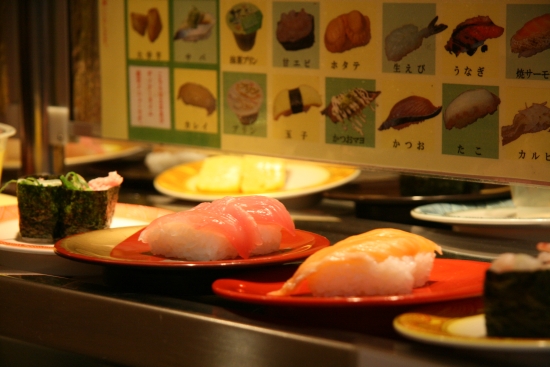 Sushi
I only had sushi for two (or three?) meals. We ended up at a sushi kaiten (train) place so we got a big variety, although I think most other sushi places were the make-as-you-order variety. The latter also means that you end up ordering lots of small pieces, and the price adds up very quickly. Many places also serve the recognisable onigiri sushi (triangle sushi rice wrapped with seaweed and filled with something) such as the first hotel where a large variety of it was served for breakfast.

One noticeable thing about the sushi is that all of the toppings are super fresh. You can get that here in London, though it can be really expensive. Fresh fish and toppings are super critical to the Japanese and I nothing ever seemed to smell the slightest bit fishy (a huge indicator it’s off). It’s hard for me to conclude whether or not it was better, after all I’ve had some good sushi in London as well (Yo Sushi doesn’t count). 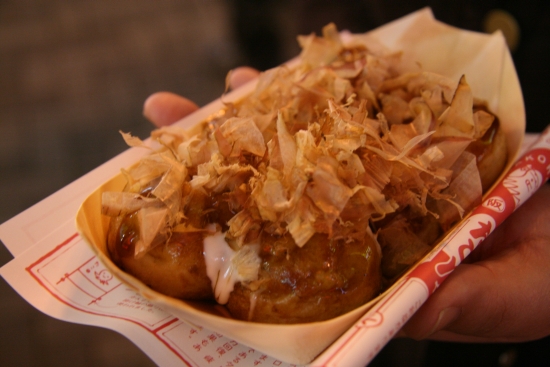 Takoyaki
Octopus balls are the quintessential Osaka prefecture delicacy. It’s almost like fast food with so many little stalls set up to serve the gooey balls covered in a salty brown sauce and topped off with seaweed and bonito flakes. I think it’s an interesting process to watch them make it, pouring a batter on to a black iron cast pan that looks very much like a Poffertjes pan and then quickly turning each individual ball with an elongated toothpick as it sets and seeding it with a touch of octopus in the middle.

I enjoyed trying it but I can’t say that I would have lots more of it. I think I was expecting something a bit more on the lines of a fishball, yet turned out a bit too gooey for my tastes. 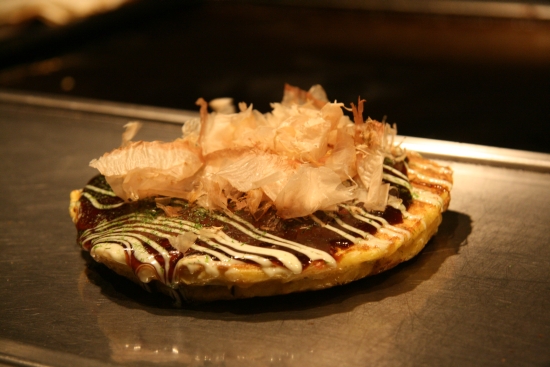 Okonomiyaki
I love okonomiyaki, yet another regional speciality. I love it so much, I’ve even made it a few times at home (it’s not really that hard!) It’s hard to describe and frankly the common description of a savoury pancake doesn’t really do it that much justice. It’s fascinating to watch the chefs make it on the griddle (although they also have a number of places you can do it yourself), expertly forming it into a round shape, and cooking it well through before drizzling Japanese mayonnaise in fine drizzles and okonomiyaki sauce before topping with the seaweed and bonito flakes again. 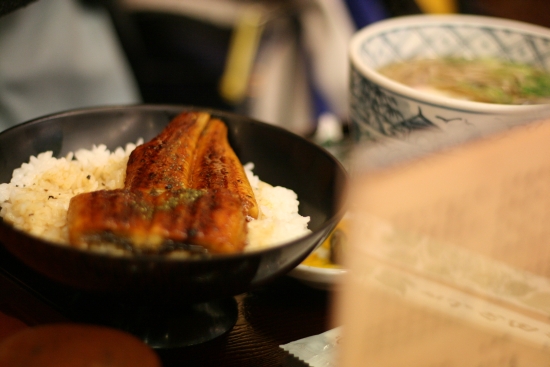 Unagi (Eel) Don (Rice bowl)
Anyone who’s gone out to eat sushi with me will know of my long standing obsession for the unagi nigiri. Succulent eel meat, grilled and then glazed with a nice sauce makes for such a tasty treat that I don’t think I ever resisted an opportunity to have the larger version whilst in Japan, the Unagi-Don.

Unagi is a speciality and considered a bit more of a luxury dish, therefore it tends to be a bit pricier than other typical Japanese dishes. Compared to the costs of it here in England though, it’s relatively better value.

Other dishes
Of course we had a huge amount of lots of other different Japanese dishes (ramen, udon, katsudon, bento), but the ones above were definitely the highlights of the trip.

One Reply to “Japanese Food”