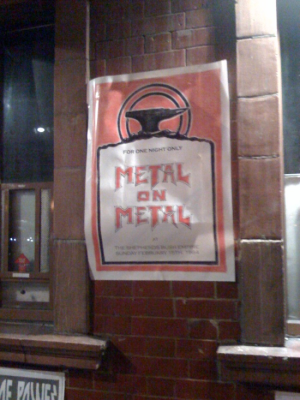 On Sunday I ended up at Shepherd’s Bush Empire to participate in one of the Secret Cinema events, a themed evening out where the movie is secret right to the very end and the location disclosed just a few days earlier. When I signed up for the ticket, all I knew was that there were going to be “Rock Gods” and “Shady Promoters”. Later I find out the theme of the evening is 80s rock, so I end up buying a vintage leather jacket on the weekend to accommodate. I found a decent bargain at Rokit in Covent Garden too, so pretty stoked about that.

To be honest, I don’t remember that much about the 80s other than lots of curly hair and bright coloured slacks. After all, I hadn’t even hit my teens at the end of it. I had a much better understanding of 80s rock when I saw everyone else. Ripped shirts, brightly coloured, tight fitting trousers and tights, and lots and lots of messy hair apparently was the idea. The extras hired by (or from) Secret Cinema also came in complete theme and entertained us as we lined up in all of our different lines. We had bikes come through, rock papparazi, a skirmish between two rocked out blokes that made the line up in Fabric on a Friday night look super tame.

When we entered the empire we took to our second floor seats, complete with a bottle of Vitamin Water and a packet of crisps. Other attendents stood around in the aisles, handing out small buckets of popcorn as everyone else eventually made it to their seats. Complete with band kit, it wasn’t long before we witnessed a rock weding, watched a small film about a Heavy Metal Drummer in the middle east and began the session with Toronto based band, Cauldron.

It wasn’t long before the real movie was announced, apparently the premiere of Anvil! The Story of Anvil, though my sister had recently been to yet another “premiere” of it earlier in the week. It’s a great movie though be warned it’s a documentary and probably not for everyone. I’d seen it advertised and I can’t say it was one that I’d go to the cinemas for. It follows the tragic tale of a Canadian band who had a profound influence on the heavy metal music scene, yet never found the fame that they deserved. Throughtout it, we see them and their, almost, unwavering belief and passion for their music. What was surprising at the end of the movie was that Anvil the movie was suddently displaced by Anvil the band in real life. They played three songs before calling it a night, and what a night it was!

One Reply to “Secret Cinema meets Metal on Metal”