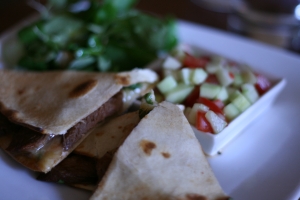 After looking for somewhere nice to eat in Bath and discounting all the Michelin starred restaurants because they were not really accessible without a car, we ended up booking dinner at the Firehouse Rotisserie, a Californian themed restaurant serving modern American cuisine. Forget burgers and think more of wood fired pizzas and, as the name suggests, rotisserie cooked meats. We started with the Goats Cheese Fondue and the Duck Quesadillas, both of which I think we could have both skipped. The Goats Cheese Fondue looked like it was simply bubbling Goats Cheese served with some corn chips and the Duck Quesadillas were disappointingly dry and not very spicy at all. The only good thing about the quesadillas is that it had been served with two small salads. 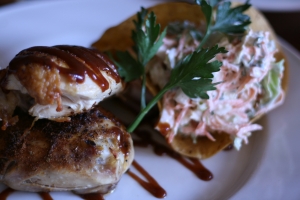 The mains looked much more promising, with both of getting the two different rotisserie cooked chickens – a dry rubbed BBQ one, and a lemon and herb infused one. Each serve had two pieces of chicken, a breast and a leg, both of which remained surprisingly moist despite looking rather dry. The herb encrusted one had plenty of flavour, though was much more subtle than the salty and spiced BBQ one. I’d say that the herb chicken dish definitely had far too much going on their plate, including bacon, cooked lemons and a dijon tarragon aioli that would not have been missed had it not been there. The BBQ chicken was a bit more balanced with a delicious jalapeno coleslaw complementing the sweet and spicy chicken. 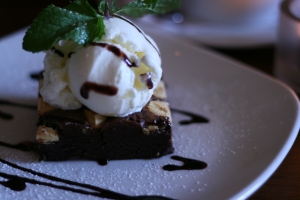 We finished with dessert, firstly a mango and white chocolate brulee and a chocolate brownie served with a refreshing coconut ice-cream. The brulee mixture really didn’t work very well with the subtle creamy texture of the white chocolate brulee ruined by a watery and over-poweringly sweet mango base. Though still very nice and an exceptionally large portion, I don’t think I’d order it again. The brownie on the other hand went down very well and the coconut ice cream surprisingly went well with it, though it is a dish that’s pretty hard to get wrong.

Details: Firehouse Rotisserie (Bath)
Found on: 2 John Street, Bath, BA1 2JL
Contactable on: 01225 482070
Highlights: Different California cuisine with interesting rotisserie offerings. Good selection of extras and reasonable main dish prices.
Room for improvement: Very ordinary starters, service nothing special and could simplify a number of their dishes as it looks like they’re trying just too hard.
The Kua Rating: 7 out of 10