Just a quick reminder to myself about a number of tools available to people interested in Systems Thinking:

I’ve been interested in Systems Thinking explicitly for the last two or three years. I haven’t had many good books I could recommend to anyone other than “The Fifth Discipline.” Last year, I inherited a wealth of Jerry Weinberg books from fellow geek, Romilly Cocking and just got around to digesting a very classic book, Quality Software Management: Systems Thinking. Weinberg, whether or not you know it, has had a huge effect on our industry. He has written many books on wide ranging topics, and being a participant/organiser of the Amplify Your Effectiveness (AYE) conference continues to influence many leaders.

Anyway, back to the book. 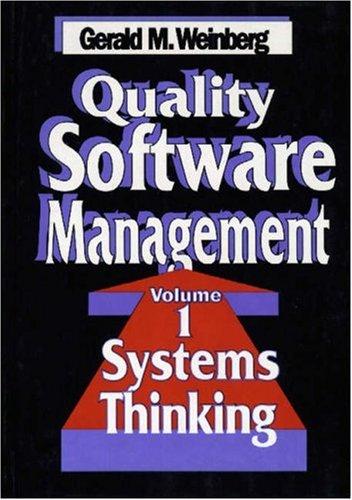 Hard cover books are always a lot more intimidating than their soft covered brethren. Perhaps it’s the sheer bulky that does it. Fortunately the text is rather large and with only about 280 pages of content, easily consumed on a number of continental flights between the “no-electronic gadgets” zone.

I’ll admit that describing Systems Thinking is hard. Walking through, what Weinberg calls, Diagrams of Effects are intuitive when he explains them step by step, however I find it hard to describe the process and never have been very confident in some of the ones that I have used.

The Mechanics of Systems Thinking Diagrams
One tip that Weinberg talks about is thinking about the things in the boxes as things that you could measure (or you do measure) and their relationship between each other. Giving the item in a circle a name has been a challenge for me, and Weinberg presents a heuristic I feel I can make better use of.

Unlike models I’ve seen from places like Soft Systems Dynamics, Weinberg doesn’t use a plus or a minus, and maybe you’ll find his notations work for you. I can’t say they worked or didn’t exactly work for me. I did appreciate the different take on making the secondary, or implicit loops more explicit by attaching repeating loops to the lines they amplify, rather than to the entity they end up with.

In other Systems Thinking Diagrams, people sometimes note a delayed effect, something I was surprised didn’t really turn up in the book to a great deal. I don’t know whether or not this was intentional or not. A new difference I learned though was putting on another notation for diagramming where managerial decision/input affects the Systems Diagram. The way that Weinberg wrote about using this brought a little bit more of a humane aspect to it.

Repeating the role of Mental Models
In the Fifth Discipline, I didn’t really understand the importance of Mental Models related to the point of the Learning Organisation. After chatting to Mark Needham recently on the way that people interpret different things, and seeing how crucial this was to interpreting and drawing Systems Thinking Diagrams in Weinberg’s books, I better understand why these two things cannot be detached. In fact, it was very timely with the question that XP2011 keynote, Esther Derby kept asking, “In what world would this make sense?” to see things from a different Mental Model.

Weinberg tells a really good story about how these Mental Models effect the observation. He recalls a story talking to a manager who’s managed to work out how to distinguish good programmers from the bad ones. The manager starts talking about how he’s noticed how some programmers talk a lot to end users, or to other programmers. A grinning Weinberg, nodding at the manager’s observation slowly stops as he comes to realise how the manager don’t think of these inquisitive, communicative programmer’s as the better ones, unlike what Weinberg (and maybe you and I were thinking). Same observations, different interpretation.

Reconfirmation of in built human biases
We are full of biases that we aren’t even aware of. Many of Weinberg’s anecdotes remind me of some in particular. For example, he talks about how managers running projects that continue to fail, blame it on “bad luck”, or “something out of their control”, whilst taking personal credit for those that do succeed. This is a really good example of the Fundamental Attribution Error.

Things that didn’t work for me
Throughout the book, Weinberg refers to Pattern 1 and Pattern 2 type organisations. Even though he explained them early on in the book, I found it difficult to anchor any real meaning to them by the time I’d finished the book. I would have liked to have seen him give them better names and use them throughout. It’s a minor detail, however I did notice this slowing down my reading.

Summary
I’d recommend this, still highly relevant, book to people involved in IT today. Though it’s published in the early 90s, I’m surprised at how many of the stories are still relevant. It not only explains the basics of thinking with systems using models anyone can relate to. It also explains those systems diagrams that apply to the software problems of today.

First full day of XP2011 was a pretty full schedule as I had to prepare for two lightning talks on different subjects. Fortunately both of the topics were very close to my heart, one about learning using the Dreyfus Model (slides) and the other about Systems Thinking (slides). The second day started off with a great breakfast selection at the conference hotel before kicking into the keynote by Esther Derby. Clearly jetlagged, Derby used a set of hand drawn slides to explain her topic, “No Silver Bullets”.

Her presentation style was very conversational and I can’t say that the crowd responded very well to this. Perhaps it was their jetlag as well, or the way the room had been set up. Nevertheless, through many of her stories, I still saw many heads nodding and a really great response on twitter to the things that she was saying.

I’ve followed Derby’s writing for years and could only wish more people would be exposed to them. As a result, I found many of the topics and opinions I found interesting reinforced, such as failing to address the management layer inevitably means agile adoption hits a hard ceiling. Or the oscillating behaviour that results when managers attempt to react to a system with long delays in its feedback cycle. I appreciated the very vivid term, “Bang! Bang!”-management style describing the style of managers who seem to have only two distinct and opposing reactions to a system, unable to moderate their use and wait for systems to find a new equilibrium. If you imagine these two opposing reactions the result of a huge iron lever being flipped, hopefully you can imagine where the noise comes from.

Derby covered lots of different areas, quoting a few people like Donella H Meadows, “The original purpose of hierarchies was to serve the sub systems, not the other way around.” And the work that George Lakoff does with word association with metaphors in our everyday use. Raising self awareness of your own in built biases and metaphors is another key thing she emphasised focusing on the judgements, habits, feelings, thoughts, mental models, beliefs, rules and values we tend to be intrinsically governed by. I particularly liked the phrase she uses to help people uncover their own and others’ mental models, “In what world would this make sense?”

She also reminded me of the work of Ackoff, who I need to revisit, and the great work that he’s written about Systems Thinking. I have only been able to refer to the Fifth Discipline as a Systems Thinking book, but I really need to read his other ones to see if they would be of use, or are more accessible.

The rest of the day was a bit of a blur. A couple of highlights included seeing Marcus Ahnve take the work Luca Grulla and Brian Blignaut did with TDDing javascript to the next level and doing a demo of BDD.

David J. Anderson also reminded me of the importance to think in terms of the languages executives speak in order to better get our message across. He reminded me of all the great things that Ross Pettit has to say, although I think Anderson’s analysis on accounting for software development costs doesn’t seem to match with some of the data I’ve heard from Pettit.

There was so much more to the conference. Always the way great conversations emerged and the wonderful atmosphere of the hotel adding to the uniqueness to this event.