Linda Rising’s “Who Do You Trust” Talk

On the Monday just gone, I attended Linda Rising’s talk held at the very nice Immobilien Scout 24’s office in Berlin. This isn’t the first time Linda has presented this topic, however it’s a powerful message worth spreading further. More than that, it’s just great just listening to how Linda presents and interacts with her audience. 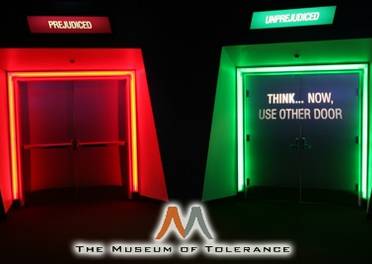 This talk focused on the in-built prejudices we all have. Having most recently been reading about our in built cognitive biases for one of my earlier talks this year, I was very interested in hearing some of the stories Linda had to tell. Her opening slide with the opening doors to the Museum of Tolerance showing the options you have for entering (see the inline photo).

She also used a lot of great stories based on real life research, talking about the way that we naturally fall into groups and the language that we used being one indication of the strength, such as “them” and “us”. She presented about the Robber’s Cave Experiment by Muzafer Sherif. She presented the Solomon Asch experiments that described how we conform to peer pressure although all you need is one opposite vocal opinion to break the effect (this one helped me understand why blind planning poker can be powerfully effective).

Her description about the way that we stereotyping also having further effects, with the example of studies that demonstrate that simply reminding people of their gender at the beginning of a maths test significantly alters the outcome. Fortunately these things can be put to good use, such as the way that Norm Kerth’s Retrospective Prime Directive helps to reframe meetings.

It was a really great session and for those interested, you can watch this (though I recommend seeing her in real life) here.