Thoughts about the second day
Ivar Jacobson gave an equally uninspiring keynote, talking about “What they don’t teach you about software at school: Be Smart!” In it, he focuses on the fact that it’s not only enough to try to “Be Agile”, but you need to “Be Smart”. Unfortunately many of the items that he talked about didn’t really seem to be any different from “Being Agile” and that he had obviously targeted the wrong audience.

I’m glad the conference ran with an open space session, this year introduced by Willem Van Den Ende and Lasse Koskela. I suggested a topic titled, “The Kanban, Lean, Agile Divide” and I felt we had the best quality discussions during this open space. I wanted to answer a number of questions including:

Out of around the 12 people participating, probably only two or three hadn’t heard about the community, and only one or two people were active in participating (in the mailing list portions). We had lots of discussion as to what people considered as Kanban as well. 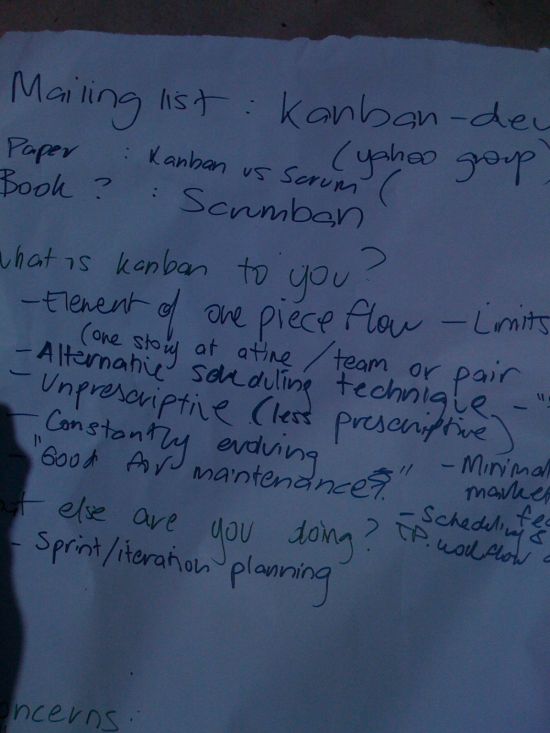 First page of notes from the open space session

We noted down the mailing list, available on Yahoo Groups: Kanban-Dev and several “published” resources including the paper, Kanban Vs Scrum, and the book, Scrumban.

When asked about what Kanban was the participants, here’s what we recorded:

I recorded that some people were still doing sprint/iteration planning whilst using Kanban though I don’t remember if we got into the details.

I also recorded two concerns, such as knowing, “When do we get stuff done?” and a very “Loose Terminology” leading to lots of confusion, particularly the overloaded associate with Kanban (as a practice) and Kanban (as a methodology).

When asking the question, “Is there a kanban divide?” some answers included, there is maybe a divide in a community sense, and when probing further, when interpreting Kanban as a practice, not a methodology there wasn’t however there was definitely a sense when treating Kanban as a methodology and not as the practice with a feeling that some people in the community wanted to make money. 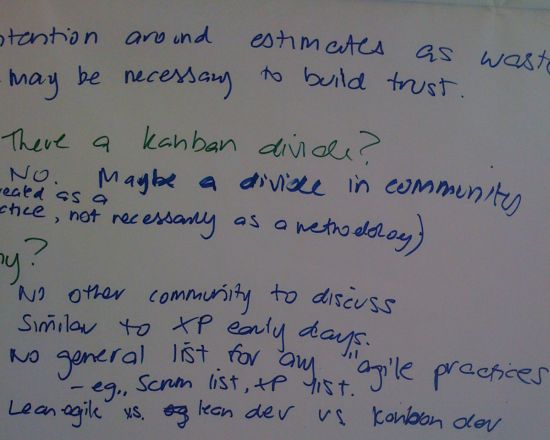 Last page of notes from the open space session

We asked why the community divide and understandably, there was no real community around to openly discuss Kanban (as a practice) and felt similar to those that had been around during the XP early days. There didn’t seem to be any general list for “agile practices” with extremeprogramming and scrum-dev mailing lists. It’s also not the first time practices have had their own list, like the pairprogramming or the test-driven-development lists. We did note down that there were several potential ones the community could have joined including lean-agile, lean-dev instead of creating their own kanban-dev.

In the afternoon, I went along to the panel on Lean Software Development although I seemed to come away with the same questions and less answers. One of my questions about budgeting was answered by the next morning’s keynote, while another focusing around the lack of discussion around practices seemed to be dismissed by Mary Poppendieck as, “I don’t believe in practices”, maybe best surmised as, “I don’t know” (which I would have also been happy to take).

The evening was an impromptu beach BBQ held by the awesome folks at Agical. Whilst a small company, I’m glad to see them still as passionate and having grown year upon year with more enthusiasm about a huge variety of topics. The BBQ was amazing and I know that everyone had a great time.