A model for understanding retrospective impact

Steven List asks the question, Are Retrospectives an Anti-pattern? Of course, retrospectives are a topic close to my heart so I naturally wanted to share my view of them. The conversation apparently started on the Kanban Development mailing list and Steven’s post already captures some great discussion. I won’t repeat it here, but I find the dialogue echoing the same sentiments about other agile practices and whether or not they’re useful. For me, it’s too extremist and not particularly helpful. They make it sound like you need to choose from two positions: Either you run retrospectives, or you don’t.

I think the more interesting question is, “When are retrospectives most useful?” To help explain my thoughts, I’ve put together the following: A Model for understanding Retrospective Impact (click on it for a slightly bigger view). 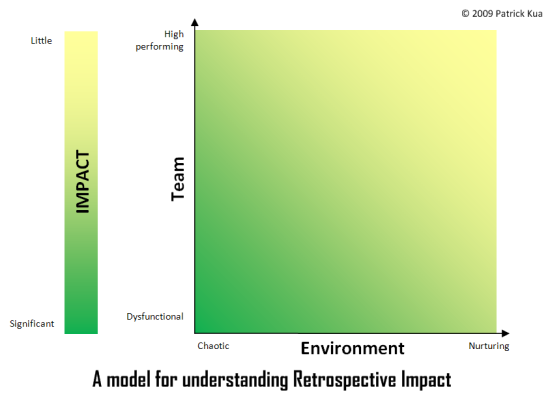 What is a retrospective?
Being specific and clear about this term is important in the discussion about whether or not retrospectives are useful. Some people’s understanding of a retrospective can differ from other people’s depending on each of their experiences. The conversations on the Kanban list seem to imply retrospectives are solely an iteration focused ritual (and of course, there is no such concept of a Scrum or XP iteration in Kanban). Though I appreciate Kerth’s original definition, I think in the agile community, Derby and Larsen’s definition better captures its essence:

A special meeting where the team gathers after completing an increment of work to inspect and adapt their methods and teamwork.

I like this definition best because its ties the concept of improvement (inspect and adapt) based on a shared understanding (the team) according to some unstated time period (an increment of work, noting it’s not specifically tied to an iteration).

What is impact?
I think it’s also important to define the term impact. One of the definitions by the Oxford Dictionary seems most appropriate:

a marked effect or influence

I want to emphasis that you can have a high impact retrospective without necessarily taking a lot of time, and that the opposite is entirely possible too (a long retrospective with a low impact). Note that I’m not going to discuss how to run retrospectives that have the highest impact (a totally separate topic worth its own set of posts).

Effect of team dynamics
The state of the team has an enormous influence on the impact of retrospectives. A high performing team will naturally have better communication amongst its members, and are more likely to fix things that get in the way of their goal. There will naturally be better and more frequent individual improvements, identified and implemented more frequently without the call for a specific meeting. This doesn’t mean that retrospectives are never a practice they call upon. Rather, it’s a practice that has less impact as there are many other items in the toolkit that get called upon. Sometimes it’s important for the group to get together, establish a common understanding and to inspect and adapt noting there may not be any specific regularity to these particular meetings.

In contrast, a dysfunctional team are less likely to call upon individual improvement practices, and thus, retrospectives play a more important role, providing an explicit opportunity to improve. I use the term dysfunctional in this sense to capture a broad category including newly formed teams, or simply groups of people. This does not necessarily mean the team cannot advance, nor that it hasn’t had a chance to advance, just simply the state it exists in.

Environmental Effects
I would classify a majority of environments as chaotic. In chaotic environments, improvement isn’t second nature. Through practices that start with good intentions such as auditing (“I want to have confidence you are doing what you say you are doing”), people in these environments become afraid to suggest changes, and are often fearful of attempting anything different because they’ve been punished for a failed experiment in the past. In these chaotic environments, retrospectives have a significant impact by providing an explicitly safe environment for teams to make, commit to, and hopefully be supported in making changes. Retrospectives have a higher impact in these environments because the majority of other activities doesn’t encourage learning, innovation and improvement.

In contrast, a nurturing environment welcomes fail fast innovation, rewards learning from failed experiments and supports continuous improvement in an explicit, non document centric approach. In these environments, the outcomes from implementing improvements and passing on tacit learnings is more important that meeting audits and compliance. Retrospectives have less impact in this environment because individuals are more likely to suggest and implement improvements without the need for a special meeting, and without the need for an entire team. Once again, it doesn’t necessarily imply that retrospectives are not useful (some issues require a shared understanding across the entire team) or that they are regularly scheduled events.

In the next set of posts, I hope to describe different situations I’ve seen first hand and what impact retrospectives had in relation to them.

Leave a comment and let me know what you think.