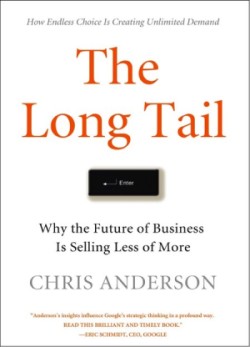 Chris Anderson’s book, The Long Tail, is a well written, insightful book full of anecdotes and data describing a different way of looking at businesses. Starting as a set of ideas on a blog, The Long Tail continues to describe an economic model worth pursuing where, often tapping into The Long Tail yields much more profitable and consistent results. The book continues to detail the forces and effects that must be in play to create an effective Long Tail environment.

I enjoyed it because it describes not only Internet phenomena, but describes the model applying to many other different scenarios. It uses concentrations of cities to explain a similar Long Tail effect. Take London for example, which, due to its dense structure and attractive forces results in a plethora of thriving sub-cultures all existing under the umbrella of a larger one. Though it’s easy for people to be drawn to a large city simply for the “larger” slices of the market, it’s often the contribution and variety of the smaller ones that are the interesting ones and connect people together.

The book approaches analysing segments in different ways, describing the importance of comparing things that are actually relevant and not simply doing it based on arbitrary numbers such as popularity.

A must read if you plan on working for a business, dealing with businesses, or starting your own in this century.

Got Questions About Lean?